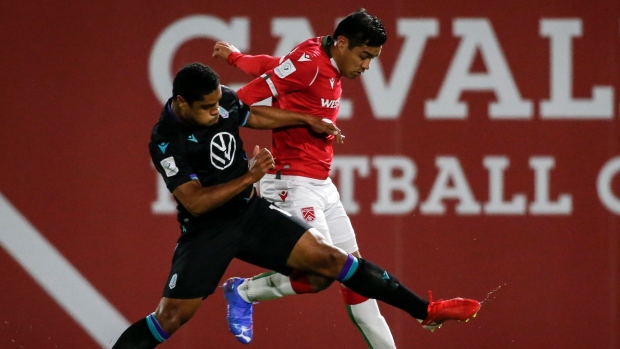 CALGARY — Having dispatched one Major League Soccer club in the Canadian Championship, Pacific FC must do that again to continue its march to a title.

The Vancouver Island club will face MLS's Toronto FC in a Voyageurs Cup semifinal next week.

"If you look at for the growth of the league of the CPL, it's always great to have a team playing in this tournament and also going far. Calgary did it in 2019 and we're there now."

Pacific ousted the Vancouver Whitecaps 4-3 in the preliminary round to advance to the quarters. Terran Campbell, who scored in the win over the MLS side, struck again Wednesday for the Tridents.

The MLS's CF Montreal, a 3-1 winner over the Halifax Wanderers on Wednesday, joins Pacific, Toronto FC and defending CPL champion Hamilton Forge in the semifinals. Dates have yet to be announced.

Montreal and Hamilton meet in the other semifinal.

"It's two CPL teams versus two MLS teams, which is fantastic for the league and the growth of the development of the league," Pah said. "This is a great advertisement for the CPL."

The 2020 Canadian championship wasn't completed because of the COVID-19 pandemic. Montreal took the title in 2019, when Cavalry lost to them 1-0 a semifinal.

Montreal as defending champion, and Toronto and Hamilton as 2020 finalists, had byes to this year's quarterfinals. The Canadian champion plays in the 2022 Scotiabank CONCACAF Champions League.

Wednesday's matchup on clear, crisp night at Calgary's ATCO Field pitted the CPL's leading clubs against each other. Pacific (10-6-3) tops the table ahead of Cavalry (9-5-4).

Calgary midfielder David Norman prevented a second Pacific goal with a savvy save in the 87th minute.

With 'keeper Marco Carducci tangled up with Victor Blasco, the latter got a shot away on net that Norman headed out of danger.

The visitors led 1-0 in the 33rd minute on Campbell's spinning left-foot chip.

When Cavalry defender Mason Trafford's header didn't clear a free kick, Abdoulaye Samake set up Campbell with a header from the side of the box.

"Really disappointing not to score a goal and at least take it into penalties," Trafford said. "Thought we left it out there, especially in the second half. Feel like we had lots of the ball and lots of chances, but we couldn't seem to find the back of the net.

"Disappointed with the goal we conceded, especially me. Should have got more on the header to clear it in the first place."

Pacific resumes its CPL schedule Saturday in Hamilton against Forge. Calgary heads to the national capital to face Atlético Ottawa on Saturday in a fifth CPL road game of seven straight for the Cavs.

New pandemic health measures were implemented Wednesday at Spruce Meadows, where fans over the age of 18 were required to show proof of full vaccination and undergo a temperature check before entering ATCO Field. Masks were required in indoor areas.

This report by The Canadian Press was first published Sept. 22, 2021.