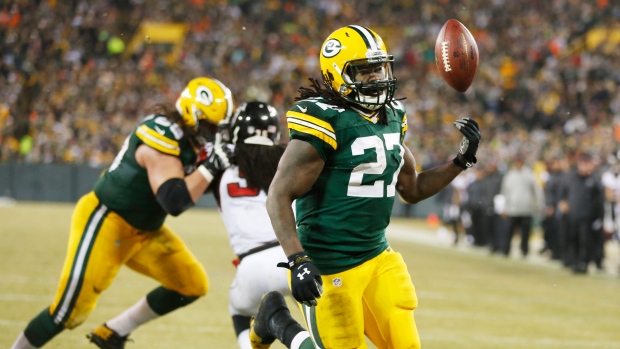 GREEN BAY, Wis. - The Green Bay Packers have a lot of options with Eddie Lacy and James Starks at running back.

"Different style of runners," quarterback Aaron Rodgers said. "Eddie is very powerful, downhill, but shifty as well. James is a slasher. He's got that different type of running style."

Starks gave a knowing smile when asked about those differences Friday, as the Packers prepared for their second preseason game Sunday at Pittsburgh.

"It's always an advantage," said Starks, who's in his sixth NFL season.

The change-of-pace Starks noted how he's been able to speed up defenders when he's gone in to spell the rugged Lacy, who has rushed for more than 1,100 yards each of his first two years in the league.

"My running style pretty much wears out defences," Lacy said. "(With Starks), they have to chase him, so that makes them tired, too. So it's a combination of constant hitting and constant chasing. Two completely different styles, so it works out pretty good."

As if that diversification wasn't enough to warrant extra attention from opponents that first try to slow down the Rodgers-led passing attack, the Packers could have more in store in their backfield.

The young trio of Rajion Neal, John Crockett and Alonzo Harris goes into the game against the Steelers battling for possibly one more roster spot at the position.

The Packers have usually taken three halfbacks into the season, though the decision at the end of the preseason this year could hinge on what they do at fullback. Green Bay has veteran John Kuhn, a two-time Pro Bowl player who has contributed at running back in the past, and rookie Aaron Ripkowski, a sixth-round draft pick from Oklahoma.

Packers running backs coach Sam Gash, a former Pro Bowl player at fullback in a long NFL career, has been stressing production in the preseason games with the young halfbacks.

"That's how runners are judged," Gash said. "If you're in preseason averaging two yards a carry, that's not going to bode well for you."

Those roster hopefuls responded in Green Bay's first preseason game last week. Of Green Bay's 133 yards rushing in a 22-11 victory at New England, more than half came from the combination of Harris, Crockett and Neal.

Harris, an undrafted rookie out of Louisiana-Lafayette, led the Packers in rushing with seven carries for 41 yards, highlighted by a 25-yard touchdown run.

Crockett, a rookie free agent from North Dakota State, had a team-high 10 carries for 26 yards and also caught a 10-yard touchdown pass from rookie Brett Hundley.

Neal, a first-year player out of Tennessee, had four carries for 15 yards. He suffered a knee injury in Green Bay's first preseason game last year, went on injured reserve, was released by the Packers and, after re-signing with them, spent the second half of the season on the practice squad.

"It's a good bunch of guys," Starks said. "All of 'em are good. They're smart guys, catching on pretty fast."

NOTE: A grand opening was held Friday for the new Packers Hall of Fame in the Lambeau Field Atrium. The two-floor attraction features nine galleries with exhibits devoted to coaching great Vince Lombardi's office, the Ice Bowl, the team's NFL championship trophies and its Hall of Fame players.