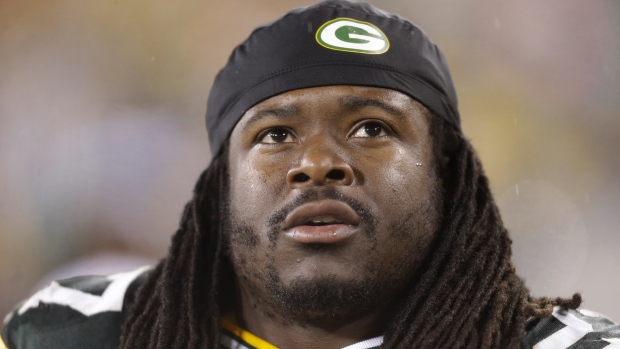 GREEN BAY, Wis. - Eddie Lacy has a chance to regain the starting running back job in Green Bay after falling into disfavour last week with coach Mike McCarthy.

"Everything Eddie wants to accomplish is right there in front of him," McCarthy said before practice on Tuesday.

Lacy didn't play much in the 27-23 win on Thursday night over Detroit. He had five carries for 4 yards, and James Starks replaced him as the starter.

ESPN.com has reported that Lacy and third-string running back Alonzo Harris missed curfew the night before the game. Lacy was demoted and Harris was released.

Lacy played only 19 snaps in the come-from-behind victory over Detroit after averaging 19.5 carries in back-to-back 100-yard rushing games against Minnesota and Chicago. Undrafted rookie John Crockett, who was promoted from the practice squad to take Harris' spot just hours before kickoff, started the second half against the Lions.

While Starks managed only 15 yards on nine carries with two fumbles, Crockett provided a spark with 22 yards on five attempts.

"I was taking it one step at a time and not trying to overthink it or be like, 'I'm trying to make a home run hit,'" Crockett said.

Green Bay returned to work on Tuesday after a long weekend off to savour the win against Detroit following Aaron Rodgers' touchdown pass on a Hail Mary to Richard Rodgers on an untimed down.

By Tuesday evening, players were focusing on Sunday's visit from the Dallas Cowboys, who are in the thick of the race in the mediocre NFC East despite a 4-8 record.

"As true professionals, we know that the momentum and the emotion only lasts so long. You have to make your own new emotions," fullback John Kuhn said.

The Packers (8-4) are back in control in the NFC North after Minnesota lost to Seattle. Having Lacy return to the form that made him a 1,000-yard rusher in his first two years in the league would help the inconsistent Packers offence.

"Everything's in front of him," McCarthy said. "If Eddie or any other player wants to jump up and grab that opportunity, it's right in front of him."

McCarthy seemed willing to give Lacy another shot. He said Lacy looked rejuvenated on Tuesday.

Notes: Three starters — RG T.J. Lang (shoulder), RT Bryan Bulaga (ankle) and CB Damarious Randall (knee/hamstring) — returned to practice after missing the Detroit game. C Corey Linsley (ankle) was the only player held out of practice. "We've had a break here, so I look for those guys to bounce back," McCarthy said. ... The Packers signed two rookies, WR Jamel Johnson and RB Ross Scheuerman, to the practice squad. The 6-foot-2 Johnson played at Alabama State last year, while Scheuerman played at Lafayette. DB Kyle Sebetic was released from the practice squad.