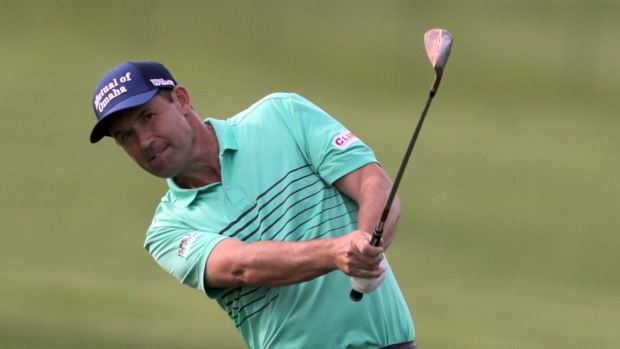 LAHINCH, Ireland — Ryder Cup captain Padraig Harrington shot a 7-under 63 on Thursday to take a one-shot lead over Zander Lombard in the opening round of the Irish Open.

With Rory McIlroy skipping the tournament as he prepares for the British Open at Royal Portrush in his native Northern Ireland, the 47-year-old Harrington quickly became a crowd favourite in his national open, which he previously won in 2007.

Harrington, making just his eighth start worldwide this year because of a wrist injury, made eight birdies and a bogey at Lahinch, an Alister Mackenzie-designed links on Ireland's West coast. He closed out his round by blasting from a deep greenside bunker to 4 feet for birdie on the par-5 18th.

"I'd preferred to have shot 63 on Sunday, but the way I've been going this year, I haven't played that many Sundays, so I needed a good score in the first round," Harrington said.

Harrington hasn't won since the Portugal Masters in 2016.

"Out there today, I was in a good place. Head was in a good place. Good things were happening. Hit lots of nice shots. I know I don't have to play as well as that for the next three days. It would be nice if I did, but we'll just go out there and try and do more of the same," Harrington said. "If nothing good happens for the next three days, so be it. I know I'm on the right track."

Lombard closed with three straight birdies for a 64.

Wade Ormsby, Mike Lorenzo-Vera, Hyowon Park, Thorbjorn Olesen, Lee Slattery, Eddie Pepperell and Chris Paisley each shot 65. Shane Lowry of Ireland, who won the Irish Open as an amateur in 2009, was part of a group at 66 that also included Martin Kaymer, Ian Poulter and Lee Westwood.

The top three finishers inside the top 10 who have not already qualified for the British Open will earn spots in the field at Royal Portrush.