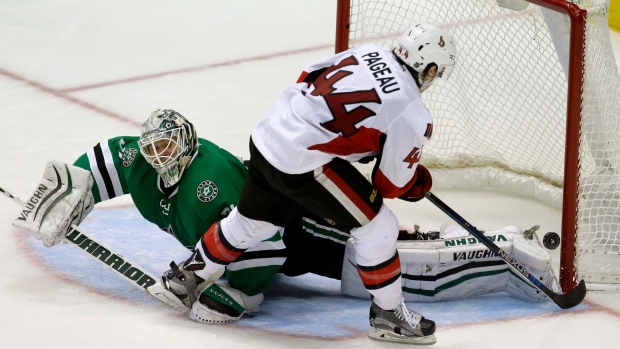 Anderson made 33 saves to help the Ottawa Senators end the Dallas Stars' five-game winning streak with a 7-4 victory on Tuesday night.

He has stopped 94 of 98 shots in the last three games.

"We had good goaltending," Ottawa coach Dave Cameron said. "Just a little disappointed when we were up 5-1 that we let off a little bit and gave them some opportunities. Two-goal game, we were leading, Andy made two huge saves. And then at the end, he made a huge save."

Ottawa was outshot 37-20 but scored three unassisted goals after takeaways, one on the power play and another short-handed.

The Senators' Mike Hoffman also had two goals, one into an empty net, on his 26th birthday. He sent the puck off the boards in the Ottawa end, banking it into the net.

"That empty-netter was pretty lucky, but I'll take it," Hoffman said

Anderson was relieved that a Dallas flurry ended that way after one of his biggest saves.

"It's the difference between 6-5 and 7-4. I saw their guy coming down, kind of open net. Just got fortunate enough that he buried it right in my chest."

Anderson had his scoreless streak snapped at 147 minutes, 4 seconds when Patrick Sharp scored in the second period.

The Senators are 4-0-2 in their last six games. Dallas' loss ended the Stars' five-game winning streak.

Ottawa didn't have a shot on goal for the first 7:10, but its attempt went in for a 1-0 lead. Ryan took the puck away from Dallas' John Klingberg in the left faceoff circle, skated in front of Niemi and tucked the puck into the right corner.

Michalek scored at 18:49 of the first period for a 2-0 lead. Stone won a battle along the left-wing boards, and the puck went to Pageau. He passed to Michalek in the centre of the left circle, and Michalek sent a wrist shot past Niemi into the upper right corner.

Sens forward Mark Stone gives his post game thoughts after a 7-4 win over The Stars.

In the second, Stone intercepted a pass from the Stars' Patrick Eaves at the blue line, stepped to the top of the slot and scored on a wrist shot for a 3-1 lead at 12:33.

Lehtonen then replaced Niemi, who had allowed three goals in nine shots. The first shot Lehtonen faced was Hoffman's goal from the top of the left circle on the power play.

Niemi re-entered the game at 1:05 of the third period, after Lehtonen collided with Klingberg. Pageau scored his short-handed breakaway goal on a shot that trickled between the Niemi's legs.

NOTES: Ryan has at least one point in nine straight games (4 goals, 7 assists, 11 points). ... Cameron said Anderson would start again on Wednesday at Colorado. ... Ruff said Lehtonen would be evaluated on Wednesday. . Dallas D Jason Demers (lower-body injury) was scratched from the lineup, but D Jordie Benn returned after missing Saturday's game because of illness. Ruff said he expected Demers to play on Friday against Vancouver. ... Klingberg took the NHL lead with his 20th assist on Sharp's goal. He and Ottawa's Erik Karlsson, who assisted on Hoffman's goal, are 1-2 in scoring among the league's defencemen. . Dallas had won the previous seven games against the Senators dating back to 2008.