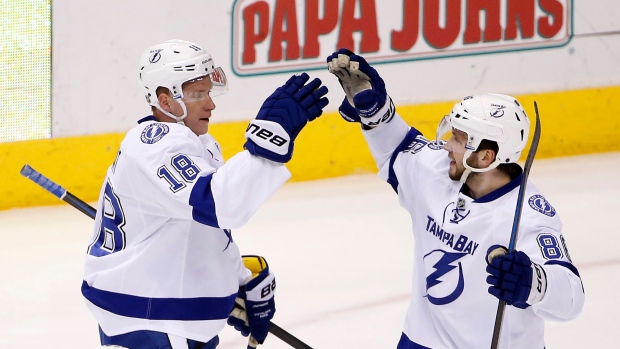 GLENDALE, Ariz. - Ben Bishop quickly went from bored to busy, and Tampa Bay was suddenly struggling against one of the NHL's worst teams.

However, the Lightning are a more confident bunch these days, and they did just enough to secure a successful road trip.

Ondrej Palat scored twice, Ryan Callahan had a goal and an assist, and the Lightning held off the Arizona Coyotes 4-2 on Saturday night.

Bishop made 11 of his final 20 saves in the third period for his 30th win of the season as the Lightning withstood a shaky finish to improve to 3-1 on their five-game trip.

They remained one point behind Atlantic Division-leading Montreal.

"To be honest, it was kind of nice to get some shots," Bishop said of the sudden barrage he faced after Tampa Bay built a 3-1 lead. "It was one of those things where you bend and not break. A couple big blocks in the third period, too."

Steven Stamkos made up for a giveaway that led to Arizona's second goal by scoring his 32nd into an empty net with 4.3 seconds left. It gave the Lightning consecutive road wins for the first time since early last month.

"I wouldn't say it's a great road trip. If we win (Sunday in Colorado) it will be a great road trip," Bishop said. "But we have six points, and we always talk about getting as many points as road games."

Michael Stone and Mark Arcobello scored for the Coyotes, and Mike Smith made 23 saves in Arizona's fifth straight loss overall and eighth consecutive at home. Arizona, which had a franchise-record, nine-game road skid earlier this season, dropped to an NHL-worst 9-16-4 at home.

"It's been a challenging season," captain Shane Doan said.

Callahan's shot from a difficult angle along the goal line bounced off Smith's shoulder and in for his 18th goal late in the second period to make it 2-1.

Tampa Bay appeared to put it away when Palat muscled past Jordan Martinook during a poor Arizona change and sent a wrist shot past Smith early in the third period for his 14th goal.

But the scuffling Coyotes got back in it.

Arcobello, claimed off waivers from Pittsburgh 10 days earlier, scored his third goal in four games on a breakaway after he stole the puck from Stamkos at 11:42 of the final period.

Arizona, held to 10 shots through two periods, peppered Bishop with 12 in the third. And the bench was upset with an offside call that wiped out Doan's rush just before Stamkos' clincher.

"I looked at it, and it wasn't offsides," Coyotes coach Dave Tippett said.

The first period provided the Lightning plenty of angst, too

With Stamkos getting treatment on his right hand, the Coyotes went ahead 1-0 on Stone's wrist shot from the top of the right circle.

Stamkos missed a shift, but returned later in the period as Tampa Bay continued its power play woes. The Lightning were 0-for-2 on the advantage.

Their 3-for-40 drought ended when Arizona's David Moss took a 4-minute penalty for high sticking early in the second period.

Callahan threaded a pass at the blue line to Palat, who had gotten behind the defence. Palat's slap shot from the left point with 55 seconds left on the power play made it 1-1.

"Let's just make a point: When they got a double minor, you've got to score one there, and we did," Tampa Bay coach Jon Cooper said. "I think that was a big weight off our shoulders."

NOTES: The Lightning improved to 26-0-2 when leading after two periods. ... Lightning backup G Andrei Vasilevskiy is expected to start Sunday at Colorado. ... Lightning F Brenden Morrow was a healthy scratch for a second straight game. ... Coyotes D Zbynek Michalek (upper body) missed his second straight game. ... The Coyotes assigned F Alex Bolduc to the minors as he recovers from an injury.