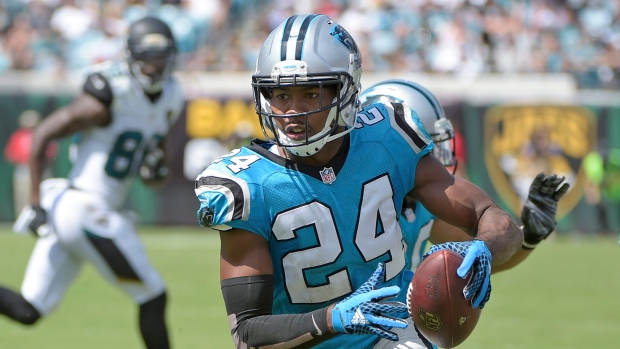 JACKSONVILLE, Fla. - Panthers cornerback Josh Norman pointed at quarterback Blake Bortles as he strolled toward the end zone, then waved bye-bye before he crossed the goal line.

Indeed, Norman was gone — and so was Jacksonville's chance of knocking off the two-time defending NFC South champion.

Norman returned an interception for a touchdown, and Carolina did just enough offensively to beat the Jaguars 20-9 on Sunday.

"Said goodbye to him on the way," said Norman, who also forced and recovered a fumble in the second quarter. "I wanted to give the defence some energy to get going."

It worked as Carolina held Jacksonville to 75 yards in the second half, intercepted two passes and got four of its five sacks.

Norman provided the game changer early in the third period when he stepped in front of a pass intended for running back T.J. Yeldon and went untouched down the sideline for a 30-yard score.

The big defensive score helped offset a big defensive loss in Carolina's second straight season-opening win. It also provided a much-needed boost for an offence that managed just 263 yards as it searches for someone to replace No. 1 receiver Kelvin Benjamin.

The Panthers seemed to rally after the loss of star linebacker Luke Kuechly, who left in the final minute of the first half with a concussion.

Kuechly wobbled to the ground after hitting Yeldon following a short gain. Kuechly tried to stand up but dropped to the ground again. He was immediately helped to the locker room, and the team later said he would not return.

"Any time you lose a guy like Kuechly, that's really tough," Norman said. "He's an animal in the middle. He plays with ferocious violence. We had to pick up our play at that point. I was glad to do what I could."

Cam Newton, playing in his first game since signing a five-year, $104 million contract, completed 18 of 31 passes for 175 yards and a touchdown. He also ran for 35 yards and threw an interception.

Newton found Jerricho Cotchery in the back of the end zone in the second quarter for Carolina's only offensive touchdown.

"It wasn't pretty at times today, but we showed flashes of what we're capable of doing," said Newton, who directed a 15-play, eight-plus-minute drive late in the fourth quarter that essentially sealed the win.

It was a sloppy game all around for the Jaguars, who have lost four consecutive openers.

And Bortles was off all day. He finished 22 of 40 for 183 yards, with a touchdown and two interceptions. His first one was the fifth pick-six in his 14 career starts.

"It's definitely surprising," Bortles said. "But it wasn't what they did to us. It was what we did to ourselves. We had multiple things where we just shot ourselves in the foot. It's fixable stuff. It's not the way you want to come out and start the season. We're not going to sugarcoat it. It wasn't good enough and we've got to be better."

Notes: The teams kicked off the season 20 years after entering the league together as expansion franchises. ... Carolina held Jacksonville to 265 yards. ... Panthers backup OT Daryl Williams (right knee) left in the first quarter and did not return. ... Panthers PK Graham Gano, who has led the NFL in touchback percentage the last three years, kicked four out of five through the end zone. ... Jaguars LT Luke Joeckel injured his left ankle late in the first half and did not return. He was using crutches and wearing a walking boot in the locker room, and said he was scheduled for an MRI later Sunday. ... Greene sustained a concussion and was not allowed to speak to the media in the locker room. ... Jaguars CB Aaron Colvin (shoulder) also left the game.