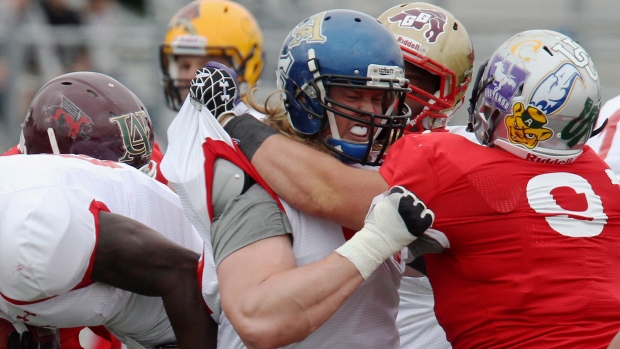 CHARLOTTE, N.C. - Coach Ron Rivera says the Panthers will turn to an undrafted rookie from Canada to protect Cam Newton's blindside on Thursday night against the New Orleans Saints.

David Foucault, who played his college football in Montreal, Canada and made the Panthers roster after a minicamp tryout back in the spring, will make his NFL starting debut at left tackle with Byron Bell out with an injured knee and elbow.

The 6-foot-8, 305-pound Foucault saw extended action last week against Seattle at both tackle positions after Bell and right tackle Nate Chandler went down with injuries at various points of the game.

Running back Fozzy Whittaker, wide receiver Philly Brown, guards Amini Silatolu and Trai Turner, and cornerback Bene Benwikere and are also listed as out for Carolina (3-4-1).

The Montreal Alouettes own Foucault's CFL rights, having selected him fifth overall in the 2014 Draft. The LaSalle, Que. native is a product of the University of Montreal.