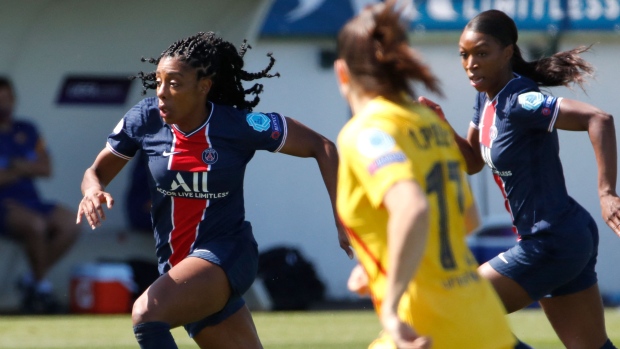 MUNICH — Hanna Glas scored a goal and set up another as Bayern Munich beat Chelsea 2-1 after Barcelona drew 1-1 at Paris Saint-Germain on Sunday in the first leg of their Women's Champions League semifinal games.

The Sweden defender fired a left-footed shot inside the near post early in the second half and the hosts kept Chelsea forwards Pernille Harder and Sam Kerr in check.

Sydney Lohmann opened the scoring 12 minutes in with a powerful header after Glas' right-footed cross bounded off the hands of Chelsea goalkeeper Ann-Katrin Berger. Melanie Leupolz tied it against her former team in the 23rd minute.

Glas carried the ball down the right before cutting inside and unleashing her decisive strike from the top of the box in the 56th minute.

“Hanna is one of the best right backs in the world,” said Bayern coach Jens Scheuer, though adding he was “surprised that she can score with the left foot. I underestimated her a little bit.”

“We know that Chelsea is an an extraordinary team, especially in their attack, exceptional players, the best in the world,” Scheuer said. “In many situations, we defended very well. We closed down the spaces very well.”

Chelsea manager Emma Hayes said it “wasn't our best performance” but sounded an optimistic tone ahead of the second leg in London next Sunday.

Chelsea captain Magdalena Eriksson sat out with a calf injury and remains uncertain for the second leg.

“The reality is, I don't know,” Hayes said. “I just hope she’s available.”

Canadian international Jessie Fleming was on the Chelsea bench.

In Paris, Barcelona secured a valuable away goal through Jenni Hermoso's competition-leading sixth tally, though she later left the game with an ankle injury.

Barcelona caught PSG’s defence napping in the 13th minute when Aitana Bonmati’s cross from the right to the back post was headed home by the unmarked Hermoso.

PSG tied it through U.S. defender Alana Cook in the 21st, with the right back heading in after France striker Marie-Antoinette Katoto headed a corner ball down to her.

Katoto missed two chances for PSG in the closing stages of the first half.

After twice latching onto passes from Grace Geyoro, she hit the post with the inside of her left foot and then flicked a shot wide with the outside of her right.

Endler made another smart stop soon after the break as Barcelona edged the second half.

Barcelona and PSG have been runner-up before — the French club twice and Spanish team once — but neither Chelsea nor Bayern have made it past the semifinals.

PSG knocked out record seven-time champion Lyon in the quarterfinals, ending its bid for a sixth straight title, but Barcelona had enough chances to win this match.

The return matches are next Sunday and the final is May 16 in Gothenburg, Sweden.