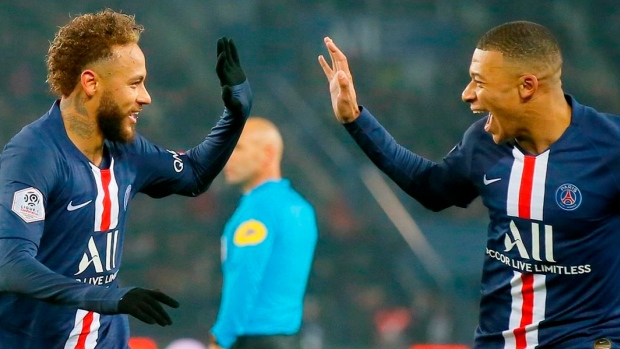 Kylian Mbappe admits he did, in fact, get annoyed with Neymar and call him a name during a Ligue 1 match against Montpellier last month, but says it's water under the bridge.

Upon being substituted in the 88th minute for Mauro Icardi, an angry Mbappe said of Neymar "This bum, he never passes to me" during the Sept. 25 2-0 win.

"Yes, yes, I said that," the 22-year-old France striker told L'Equipe. "Now, these are things that happen all the time in football. Immediately afterwards, seeing how big it had become, I talked to him about it."

Mbappe says it wasn't the first time he said something like that to Neymar and probably won't be the last, but there's no lasting issue there.

"We've exchanged a lot of words like that in the past and we'll continue to do so, because we want to win, but there shouldn't be any hard feelings," Mbappe said. "There is no resentment at all because I respect the player and the man, and I admire what he is."

The interview with L'Equipe was the second Mbappe exclusive this week to make waves. Earlier in the week, Mbappe admitted to RMC Sport that he did ask to join Real Madrid in the summer.

"My position was clear, I said that I wanted to leave," Mbappe said. "I did not appreciate the fact that they said I came [with a transfer request] in the last week of August. I said at the end of July that I wanted to go. I said it early enough so that the club could react. I wanted everyone to come out of this stronger, that we leave hand in hand."

Still, he insists he's happy as PSG now even in the final year of his contract.

"It is a club which brought me a lot," Mbappe said. "I have always been happy, the four years that I spent here, and I still am. I said, 'If you don't want me to go I will stay'."

Currently on international duty with Les Bleus ahead of a UEFA Nations League semi-final match with Belgium and a potential final against Italy or Spain, Mbappe and PSG are next in action on Oct. 15 with an match against Angers.