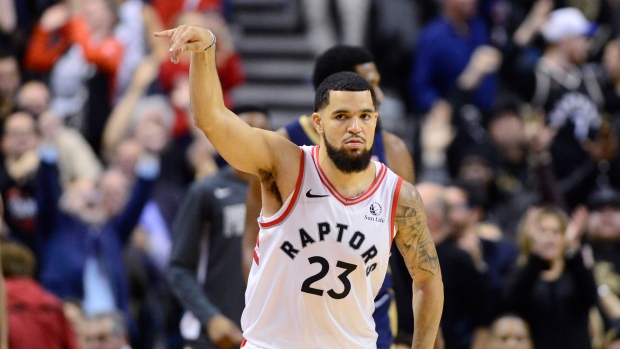 The reigning champions also picked up where they left off last spring.

Toronto closed the overtime session on an 8-0 run for a 130-122 victory over the New Orleans Pelicans in the regular-season opener for both teams at Scotiabank Arena.

"After the ring (ceremony), we got to celebrate with our fans one last time," said Raptors centre Marc Gasol. "We got the win. It wasn't easy, it wasn't pretty, but we pulled it off."

The Raptors return to TSN on Friday! Stream Raptors vs Celtics, along with 40 more Raptors & +160 U.S. games this season with TSN Direct.

With the teams tied at 122, Kyle Lowry hit a pair of free throws and Fred VanVleet drained a three-pointer on the next possession. Lowry iced it with a three-point shot of his own with 56 seconds left.

"We'll see them grow all year and continue to see them flourish," Lowry said.

Before the game, with the Larry O'Brien championship trophy on display and the Raptors watching from courtside, a video highlight package from last spring's playoff run was shown on the arena's big screens.

It showcased top moments from the first three rounds before culminating in Toronto's six-game NBA Finals win over the Golden State Warriors, the first title in franchise history.

NBA commissioner Adam Silver welcomed members of the Raptors' front office and ownership group to the floor before the players were introduced to emphatic applause as they received their championship rings.

Lowry took a turn on the mic and thanked fans before gathering his teammates around him for a five-second countdown and unfurling of the championship banner in the rafters. Queen's "We Are The Champions" provided a triumphant soundtrack.

After the festivities, the Raptors got back to work. It wasn't pretty in the early going.

The Raptors were a disorganized mess over the first few possessions. A J.J. Redick three-pointer capped a 13-4 start for the Pelicans, forcing Toronto to call a quick timeout.

The home side settled in after the break with Siakam and Lowry pulling the strings. A VanVleet layup cut the deficit to one and Siakam followed with two free throws to give Toronto a 20-19 lead.

VanVleet delivered a highlight moments later with a reverse layup, switching hands under the basket and converting the free throw for a three-point play. Nickeil Alexander-Walker — a Toronto native — responded with a three-pointer for the Pelicans, who led 30-27 after one quarter.

The absence of Kawhi Leonard, who signed with the Los Angeles Clippers in the off-season as a free agent, was noticeable. A force at both ends of the floor, Leonard's skillset is not easily replaced.

Ibaka and Norm Powell were first up off the bench and Terence Davis picked up his first basket as a Raptor with 3:37 left in the second quarter to trim the New Orleans lead to 49-46.

On paper, the season opener looked like a mismatch as the Raptors, who were 58-24 last season, faced a Pelicans squad coming off a 33-49 campaign and without No. 1 draft pick Zion Williamson (knee).

The plucky New Orleans side was game and coach Alvin Gentry made frequent substitutions with 12 different players seeing the court by halftime. The Pelicans led 61-56 at the break.

The Raptors came out with renewed energy to start the second half.

An Anunoby dunk got the crowd back into it and gave Toronto a 73-70 lead. The Raptors led 88-86 after three quarters.

"I think as the night went on we began to play too much isolation basketball and at the end of the day, they made a couple big plays at the end that gave themselves separation," Gentry said. "That was the difference in the game."

Siakam hit back-to-back three-pointers midway through the fourth quarter to give the Raptors a 103-99 advantage. The Pelicans responded with a 10-0 run before VanVleet hit a pair of free throws.

Siakam went back to work by converting a three-point play and adding a putback bucket to give Toronto a 110-109 lead with 2:37 left to play.

"We had to go to him time and time again there for stretches," Nurse said. "He produced. He was great."

The Toronto forward, who signed a four-year contract extension this week, fouled out with 59.2 seconds left.

"I'm capable of scoring and scoring in different ways," Siakam said. "I know what's expected of me and I'm going to continue to work hard to make sure that I do my job and continue to help the team win."

Anunoby, who had 11 points, played stifling defence on the Pelicans' final possession of regulation time, forcing Jrue Holiday into a tough shot that Powell grabbed for a key rebound.

Powell missed a long three-point attempt at the buzzer. Toronto has won eight of its last nine meetings against the Pelicans.

Notes: VanVleet appeared to roll his ankle late in the third quarter. He went back to the locker-room for treatment before returning to the court early in the fourth. ... Canadian sprinter Andre De Grasse and members of Hamilton rock band Arkells were in attendance. ... Some 20,000 replica championship rings were given to fans before the game. ... Toronto forwards Patrick McCaw (knee) and Rondae Hollis-Jefferson (groin) sat out. ... The Raptors have won their last seven regular-season openers.