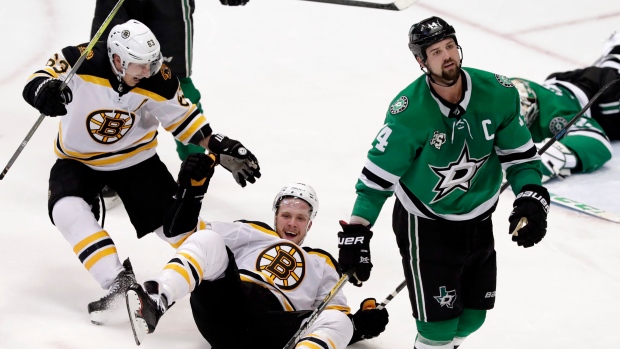 DALLAS — Once the Boston Bruins broke through in the third period, they couldn't be stopped.

David Pastrnak snapped a tie with 12 seconds left and the Bruins scored three straight goals in the third to rally past the fading Dallas Stars 3-2 on Friday night.

"We said between periods we just need the one goal," Pastrnak said. "If we get the first one, we're going to get another."

Brad Marchand scored Boston's first goal and assisted on the other two, including a short-handed goal by Tim Schaller that tied it midway through the third period.

With only seconds remaining, a scramble followed a faceoff in the Dallas end, and Marchand passed to Pastrnak in front. While falling down, he put the puck past Stars goalie Kari Lehtonen.

"I was thinking shoot," Marchand said, "but I had a couple guys in my lane and I saw (Pastrnak) drive and I figured if I get it down there, hopefully he can make a play."

Tuukka Rask made a season-high 40 saves for the Bruins.

"He made a lot of really big saves, especially early on," Marchand said. "He's been the backbone of our team all year, for a few years now."

The second-place Bruins won for the first time in three games (1-0-2) to move within four points of Atlantic Division leader Tampa Bay. Boston has already clinched a playoff berth.

The Stars are winless in their last seven games (0-5-2). They remained four points behind Colorado for the second Western Conference wild card.

"I didn't think we were very good in our own end with the puck," coach Ken Hitchcock said. "We had all kinds of opportunities on the first and third goal to get it out."

Dallas led 2-0 on a first-period goal by Esa Lindell and Jamie Benn's short-handed score late in the second.

In the third, Marchand tipped in a shot by Pastrnak before Schaller scored on a 2-on-1 with Marchand.

"We had the game. We just need to keep going," Lehtonen said. "It was a broken play, that (first) goal. Shot that got tipped. I thought it was going to come faster to the net."

Lindell scored 2:26 into the game. Jason Dickinson tried to deflect a shot from the right point into the net but the puck went wide right. Curtis McKenzie picked it up behind the goal line and passed to Lindell high in the left faceoff circle. His wrist shot went in off Rask's right arm.

Benn missed two good scoring opportunities early in the second period, but connected at 19:22. He took a pass from Tyler Seguin at the Dallas blue line and had a breakaway when Matt Grzelcyk fell down. Benn slid a backhand under Rask.

NOTES: The Bruins have won their last five games in Dallas. ... Stars D Marc Methot returned after missing four games because of a hand injury. ... Three of Schaller's 11 goals have come short-handed. ... Benn's short-handed goal was his first this season, the Stars' fifth and the ninth allowed by Boston. ... Dallas gave up eight goals in 22 opponent power plays on its winless six-game road trip but returned home and killed off all three against Boston. The Bruins' penalty killers are 12 for 13 in the last five games, including 4 for 4 on Friday. ... Marchand has 20 points (eight goals, 12 assists) in his last 11 games.

Bruins: Visit the Minnesota Wild on Sunday, the third stop on a four-game trip.