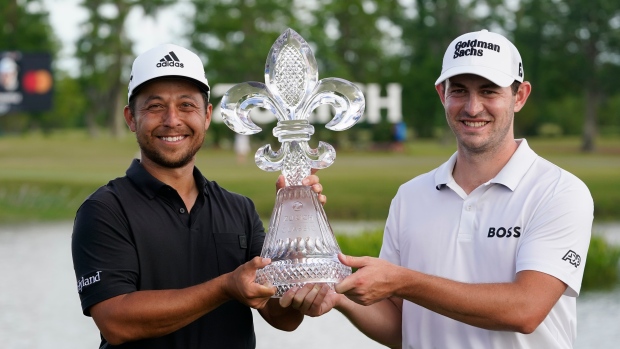 Cantlay and Schauffele closed with an even-par-72 in late afternoon showers in the alternate-shot final round to finish at 29-under 259 at breezy TPC Louisiana, two shots ahead of Burns and Horschel.

The Ryder Cup and Presidents Cup partners broke the tournament record of 27 under set by Kevin Kisner-Scott Brown and Jonas Blixt-Cameron Smith in 2017, the first year the event was as a team event. Cantlay and Schauffele are the first wire-to-wire winners since the tournament adopted the team format.

Cantlay and Schauffele opened with a record 59 in best-ball play Thursday, shot 68 on Friday in alternate shot and had a 60 in best ball Saturday to shatter the tournament 54-hole record and open a five-shot lead.

Burns, the local favorite who played at LSU, and Horschel closed with a 68. Doc Redman and Sam Ryder were third at 24 under after a 67.

Cantlay, the defending FedExCup champion and PGA Tour Player of the Year, won his seventh tour title and first since the Tour Championship in September. He won a week after losing a playoff to Jordan Spieth in the RBC Heritage.

Schauffele won for the fifth time. He last won at the 2019 Sentry Tournament of Champions.

Four strokes ahead entering the round after Jin Young Ko’s late meltdown Saturday, Hataoka closed with a 4-under 67 for a five-stroke victory over Hannah Green.

Hataoka finished at 15-under 269, a stroke off the tournament record set last year by Brooke Henderson. The 23-year-old Japanese player won her sixth LPGA Tour title a week after missing the cut in the windy LOTTE Championship in Hawaii with rounds of 75 and 77.

After seven straight pars, Hataoka put the tournament away on the par-4 15th when she raced in a 35-foot eagle putt to open a six-stroke lead. She played the first seven holes in 3 under with four birdies and a bogey.

Green finished with a 68.

The top-ranked Ko, tied for lead with Hataoka with three holes left Saturday before a bogey-quadruple bogey-birdie finish left her five strokes back, had a 75 to tie for 21st at 2 under.

IRVING, Texas (AP) — Scott Parel two-putted for birdie on the par-5 18th hole for a 6-under 65, and then won the inaugural ClubCorp Classic with a par on the same hole in a playoff for his second PGA Tour Champions title.

Parel won a three-man playoff at Las Colinas over Steven Alker and Gene Sauers, who both went into the hazard on the closing hole and failed to make par.

Sauers birdied his last two holes in regulation for a 63.

Alker played the final eight holes in 1 over for a 68. He missed an 8-foot birdie putt in regulation for the win and joined the playoff at 11-under 202.

LA PINEDA, Spain (AP ) — Pablo Larrazabal made six birdies in a seven-hole stretch around the turn and closed with an 8-under 62 for a one-shot victory in the ISPS Handa Championship.

Larrazabal won for he seventh time on the European tour, and the first time in his native Spain.

The Spaniard started the final round in a tie for sixth until beginning his burst of birdies from the seventh hole. He finished at 15-under 265 and then had to wait to see if the score would hold up. Adrian Otaegui and Aaron Cockerill needed an eagle on the par-5 18th at Infinitum’s Lakes Course to force a playoff.

Otaegui made birdie for a 66 to finish alone in second. Cockerill made par and tied for third with Hennie Du Plessis. Each shot 67.

Larrazabal won for the second time in his last four starts on the European tour and moved to No. 68 in the world ranking.

RIO GRANDE, Puerto Rico (AP) — Thienna Huynh and Sara Im opened with two birdies in three holes and never trailed, holding on for a 1-up victory over Kaitly Schroeder and Bailey Shoemaker in the U.S. Women's Amateur Four-ball.

Huynh, a freshman-to-be at UNLV, and Im, a junior in high school who won the Georgia Women's Amateur two years ago, captured their first USGA title.

They advanced to the championship match at Grand Reserve with a 4-and-3 victory early Sunday against Kary Hollenbaugh and Anna Ritter. Schroeder and Shoemaker beat Amelia Guo and Grace Jin, 2 and 1, in the other semifinal.

Huynh and Im, who made only one bogey in the championship match, stretched the lead to 3 up with a birdie on the par-4 12th. Schroeder and Shoemaker won the next two holes to close the gap, only to fail to birdie the par-5 15th to fall 2 down.

Both teams finished with pars.