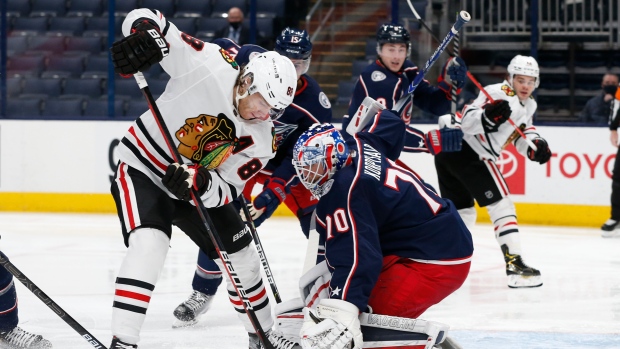 COLUMBUS, Ohio — Patrick Kane broke a scoreless tie in the third period for his 399th career goal, Malcolm Subban got his first shutout of the season and the Chicago Blackhawks beat the Columbus Blue Jackets 2-0 on Thursday night to sweep a two-game series.

After combining for 11 goals in the Blackhawks' shootout win Tuesday night, the teams grinded through scoreless hockey before Kane grabbed a loose puck in the neutral zone and beat Joonas Korpisalo with a wrist shot from the right circle at 8:45 of the third.

“It was a big goal for the team, so I think more important than anything it gave us the lead and gave us the chance to get two points,” Kane said. “It was obviously a pretty tight game, both teams were grinding it out, trying to play tight. It was nice to get a break and be able to capitalize on it.”

Carl Soderberg added an empty-net goal with 50 seconds left in the game.

“It shows we can win in different ways,” Chicago coach Jeremy Colliton said. “Obviously, you love to score goals, but sometimes you can’t control that. This game can be random, but how we defend and our commitment to the details and the work ethic away from the puck, that we can control."

Subban had 26 saves to record his second shutout in 71 NHL games and his first as a member of the Blackhawks. His only other one came on March 21, 2019, when he played for Vegas. He improved to 3-1-1 this season.

“Subban was solid, stable, good with the puck, too,” Colliton said. “He made good puck plays and made some good saves. Good trip, good finish to the trip.”

Korpisalo made 25 saves for Columbus.

“We play a good first period, they play a good second period, and it comes down to the third period — they score a goal and we don’t,” he said.

The Blue Jackets played much better offensively and defensively than two nights ago, so the loss was especially hard to swallow. They've lost five of the last six.

“In a game like today where it’s just a grind, you got find a way, dig a little deeper to get that next one, and we just couldn’t come up with it," captain Nick Foligno said.

“This is where we find ourselves right now,” he said. “I think everyone’s tired of the rhetoric and just saying things."

Kane will get a chance to score his 400th goal in Chicago with five straight home games. The Blackhawks star got two in two games against Columbus and stands one away from becoming the fourth player in franchise history to score 400 with the team, joining Hall of Famers Bobby Hull and Stan Mikita and longtime star Steve Larmer. The 32-year-old is among the NHL's scoring leaders with 10 goals and 21 assists.

Blackhawks: Subban started for the first time since Feb. 15. Kevin Lankinen started in net the previous three games. ... F Dylan Strome, who is in concussion protocol, was out.

Blue Jackets: Moved F Emil Bemstrom up from the taxi squad Thursday and brought up Fs Zac Dalpe and Ryan MacInnis from the Cleveland Monsters of the American Hockey League to the taxi squad. ... Ds Zach Werenski and Michael Del Zotto returned to the lineup after missing Tuesday's game with injuries.

Blackhawks: Return home for a back-to-back against Detroit on Saturday and Sunday.

Blue Jackets: Opens a back-to-back at Nashville on Saturday.