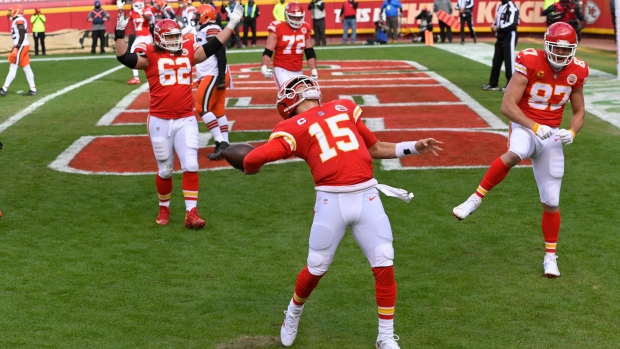 Championship Weekend has arrived, and it sure looks like it won’t disappoint.

On the AFC side, we see the Kansas City Chiefs host their third-consecutive AFC Championship game, this time against Josh Allen and his Buffalo Bills.

After leaving Sunday’s divisional round game with a head injury, quarterback Patrick Mahomes told reporters on Friday that he has cleared the NFL’s concussion protocol and is good to go for Sunday.

Allen and the Bills enter this week on the heels of the franchise’s first two playoff wins since 1995, and need just two more to capture their first Super Bowl in franchise history.

These two teams met earlier in the season, with Kansas City getting the better of Buffalo 26-17 in Week 6.

Allen’s 122 passing yards that night was the lowest number he posted all season, however, the playing conditions weren’t the best and Mahomes was held to a 225 yards – one of his lowest numbers on the season as well.

We have come a long way since Week 6, and have a lot to dive into, so let’s get going.

ALL I DO IS WIN

The formula for success has been pretty easy for the Kansas City Chiefs in recent years.

Since entering the league, Mahomes is 38-8 in the regular season as a starter, and 5-1 in the playoffs.

The only blemish on his playoff resume came in just his first season as a starter, when Dee Ford lined up offside, negating a Tom Brady interception, leading to a Patriots win and Super Bowl.

But let’s get back to this season.

Before exiting the game with a concussion, Mahomes was hobbled by a foot injury that clearly had the superstar quarterback a bit limited with his mobility.

And yet, Mahomes started six drives on Sunday, two of which ended in touchdowns, three of them ended with field goals and one ended with a missed field goal.

Mahomes looked physically limited, but it really had no effect on his game, as he completed 21 of his 30 passes for 255 yards, threw for a touchdown and rushed one in.

Meanwhile, the Chiefs defence continued its solid play against the Browns, holding them to just 17 points and keeping Baker Mayfield to just 204 yards and forcing two turnovers.

Kansas City’s defence has been very opportunistic this season and has forced a turnover in 15 of their 17 games.

Meanwhile, the Bills had 22 turnovers in the regular season, and Josh Allen has fumbled in both playoff games as well.

I think Buffalo has been fortunate to be on the right side of a number of plays in their last two games, and this Kansas City offence (and defence) won’t make the same mistakes that Indianapolis and Baltimore made.

A few weeks ago it was tight end Jack Doyle having a big day with seven catches for 70 yards, while Michael Pitman Jr. added five receptions for 90 yards.

The winds in Buffalo didn’t allow much success in the passing game last week, but wideout Marquise Brown had four catches for 87 yards and Mark Andrews had a touchdown go off his hands late in the fourth quarter.

I expect Travis Kelce and Tyreek Hill to be just fine Sunday night coming off a combined 16 catches for 219 yards and a touchdown against Cleveland.

The Buffalo Bills have played two playoff games this season.

In those two games, they have been outgained 812-521, have gone just 6-22 on third down conversions and have gotten three kicks to doink off the uprights in their favour.

Yup, after a staller 13-3 regular season campaign, the Bills have won in the playoffs, but it hasn’t been pretty.

That being said, what has been pretty has been the connection between quarterback Josh Allen and wide receiver Stefon Diggs.

Diggs has caught 14 passes for 234 yards and two touchdowns in Buffalo’s two playoff wins, and after failing to record a catch against the Colts, John Brown chipped in with eight catches for 62 yards last week in the win over Baltimore.

But the Bills’ passing game has taken a hit in the playoffs due to Cole Beasley dealing with a knee injury.

Beasley, in his second season with the Bills, was the perfect No. 2 to Diggs’ No.1 this season.

He finished second on the team with 82 catches, and 967 yards.

But his production has taken a hit since injuring his knee in a Dec. 28 win over the Patriots.

The 31-year-old had just three catches for 17 yards in that Week 16 win, was held out of the lineup in Week 17, had seven catches for just 57 yards against the Colts, and was targeted just twice Saturday night, with no catches.

On top of that, the team remains without Zack Moss after he was injured against the Colts.

Moss had emerged as the team’s top back late in the season, and got the start in the playoffs, he had seven rushes for 21 yards, with four catches for 26 yards before exiting the game.

Last week, the Bills had just six rushing yards at halftime and ended the game with a grand total of 32 yards on the ground.

I think this is finally the week everything catches up to the Bills.