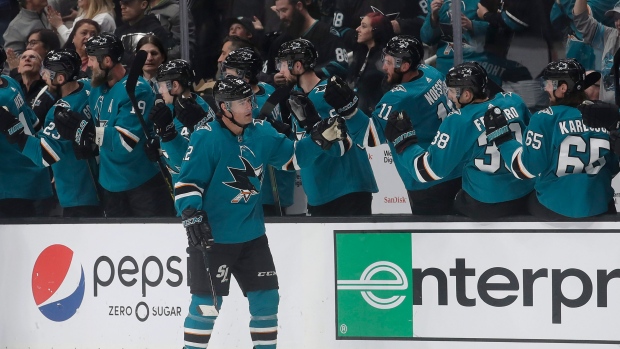 Marleau moved past Hall of Famer Guy Lafleur and into a tie with Mike Modano for 25th place on the NHL's career list with 561 goals. The 40-year-old also moved past Rod Brind'Amour for 50th on the all-time points list with 1,185 — including 1,101 with the Sharks.

“You always want to be on the score sheet, and you always want to contribute. But, over the years, one thing I’ve learned is not to think about it too much, just go out and let things happen," Marleau said.

Ondrej Kase and Nick Ritchie scored for Anaheim, which was seeking its first three-game winning streak since taking its first three to start the season. The Ducks have lost eight of their last 11 (3-7-1). John Gibson finished with 27 saves.

Noesen scored multiple goals for the third time in his career, and second time against Anaheim. He scored his third goal on a tip-in off Joel Kellman's shot less than two minutes into the game.

The Ducks pulled to 2-1 on a short-handed goal midway through the second when Kase slipped the puck past Dell on a breakaway for his sixth.

Marleau scored his second of the game and 10th of the season late in the second, and Noesen scored his fourth at 2:28 of the third.

Ritchie scored his fourth goal on a power play with 1:52 left in the third.

“We didn't have a great start and they jumped on us,” Ritchie said. “They've been known to do that. It's happened to us before in this building and it was another classic kind of San Jose start for us.”

NOTES: Ritchie was back in the lineup after missing 19 games with an MCL sprain. ... Ducks forward Jakob Silfverberg missed the game to be with his wife for the birth of their child. ... Dell made his sixth start in seven games. G Martin Jones will start Wednesday for San Jose against Vancouver. ... The Sharks wore jerseys with “Gilroy Strong” inscribed during warmups to honour those impacted by last summer’s Gilroy Garlic Festival mass shooting. ... Karlsson has nine points in his last nine games.