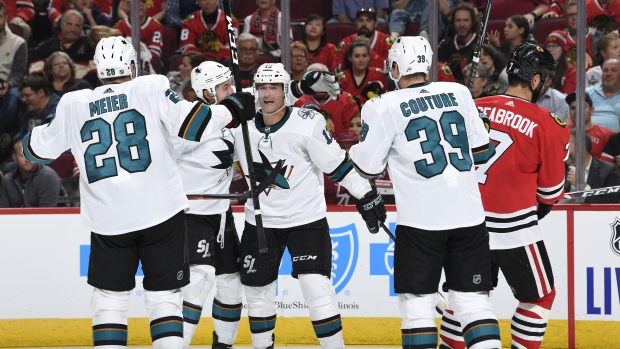 Marleau scored two goals in his first game back with San Jose, and the Sharks beat the Chicago Blackhawks 5-4 on Thursday night for their first victory of the season.

"It's just so exciting to be back and playing and being with this bunch of guys," Marleau said.

Goodrow was all alone in the slot when Joe Thornton threw the puck in front 4:47 into the third. The Blackhawks pushed hard for the tying goal in the final seconds of their home opener, but came up empty.

Andrew Shaw had two goals for Chicago, which hadn't played since its season-opening loss to Philadelphia in Prague last Friday. Dominik Kubalik scored his first NHL goal, and Dylan Strome had a goal and an assist in the opener of a seven-game homestand.

"Would have liked us to respond a little better to the adversity that we faced," Blackhawks coach Jeremy Colliton said, "because we're going to face a lot this year."

Marleau finalized a $700,000, one-year deal with San Jose this week. He had been a free agent since his contract was bought out by Carolina this summer.

Marleau spent his first 19 seasons with the Sharks. He signed a three-year, $18.75 million contract with Toronto in July 2017 after the Sharks were unwilling to offer a deal longer than two years.

It didn't take him very long to find his form back with the Sharks.

"He's a goal scorer, that's what he does," Thornton said. "He scores goals. Getting a 500-goal scorer five games into the year was huge for us. It was the boost we needed tonight."

The 40-year-old Marleau tied it at 2 when he redirected Erik Karlsson's power-play shot past Corey Crawford with 17 seconds left in the first period. Marleau added another tying goal with 2:14 remaining in the second, making it 4-all when he knocked home a rebound.

"Just trying to stay focused on getting my legs moving and being in the right spot," said Marleau, who played on a line with Logan Couture and Timo Meier. "Playing with those guys it's pretty easy to do that and they took care of me tonight."

Marleau's performance overshadowed an impressive night for Shaw, reacquired in a trade with Montreal in June. The pesky forward was drafted by Chicago in 2011 and helped the Blackhawks win two Stanley Cup titles before he was dealt to the Canadiens in 2016.

Shaw gave Chicago a 2-1 lead when he slid in his own rebound 13:22 into the first, delighting the crowd of 21,455. He snapped another tie in the second after Alex DeBrincat stole the puck from Karlsson, beating Aaron Dell with a wrist shot to make it 3-2 at 9:27.

But the Sharks got the tying goal 33 seconds later when Burns' centring pass went off Blackhawks defenceman Connor Murphy and into the net.

"I don't think we played a full 60," Shaw said. "We took some shifts off and it ended up in the back of our net a few times. They're little mistakes that can be fixed. We've got to learn from it."

NOTES: The Sharks scored five goals in their first four games combined. ... Murphy made his season debut after he was activated off injured reserve. He had been sidelined by a groin injury. ... Dell finished with 26 saves, and Crawford made 29 stops. ... The Sharks went 2 for 3 on the power play. They were 1 for 17 with the man advantage coming into the game.