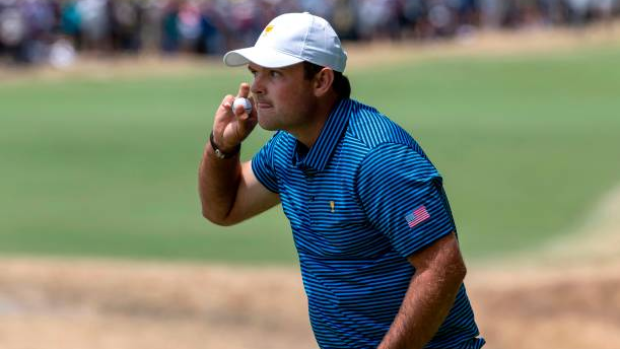 It will be billed as a comeback and perhaps in some respects it was, but at the end of the day, the American side is no closer to the Internationals than it was when it started.

Late-round heroics by three U.S. pairs staved off another big performance from Ernie Els’ International team in the foursomes, giving them a tie for the day, each side with 2.5 points.

At one point, the International side led all five matches, but lost two on the final hole when Patrick Cantlay and then Justin Thomas rolled in birdie putts to clinch their games. Rickie Fowler drained a 10-foot par putt to add a half point.

Emotionally, it was a big finish for captain Tiger Woods’ team, which has looked positively mediocre through the first two days of play.

“At one point, we were down in four and even in one,” said Woods, “and so it looked pretty bleak, but the guys turned it around. They played phenomenal coming in. It was important for us to end the way we did and it totally changed the last hour.”

While acknowledging the momentum shift of the last hour and what might have been, Els was looking at a glass half full.

For just the third time in the event’s history, the International team has a lead after the opening two sessions.

That is reason to celebrate but Els isn’t ready to let his foot up off the accelerator. He’s been a hard-nosed captain and is expecting his team to deliver in the double day on Friday when both four-ball and foursome matches will be held.

“It’s perspective, isn’t it?” he stated. “I've got to look at where we are. It's easy to just look at where we could have been, because it was looking really unbelievable. But we're in a very good position.”

Woods, meanwhile, will sit out the first session and serve just as the U.S. captain. His role as team leader was questioned after the second session when he announced that Webb Simpson and Patrick Reed were being sent out for a third straight match despite going 0-2. Reed, in fact, is riding an 0-4 mark in team play, going back to last year’s Ryder Cup.

The player known as Captain America lit up the Australian fans as well as social media by responding to taunts from the crowd with a mock shovel-digging gesture. The reference goes back to his penalty at last week’s Hero Challenge where he moved sand – an action some believe was cheating.

If nothing else, Reed’s move gave the event a bit of an edge, something it’s lacked in past years. And with the Internationals out in front, the makings of a good weekend – something else the Presidents Cup desperately needs – lay ahead.

This will mark Haotong Li’s debut after sitting out the first two days. Leishman played better in his foursomes match while Fowler and Thomas, despite 18-hole heroics, have been mediocre at best.

This has been Abraham Ancer’s coming-out party for those who weren’t familiar with him. He’s been perhaps the best player on the Internationals. They will be in tough against Patrick Cantlay and Xander Schauffele.

The biggest question is why captain Tiger Woods would put Webb Simpson and Patrick Reed out again after they started 0-2.

If Adam Scott can keep his putter working he should give Ben An a chance to shine.