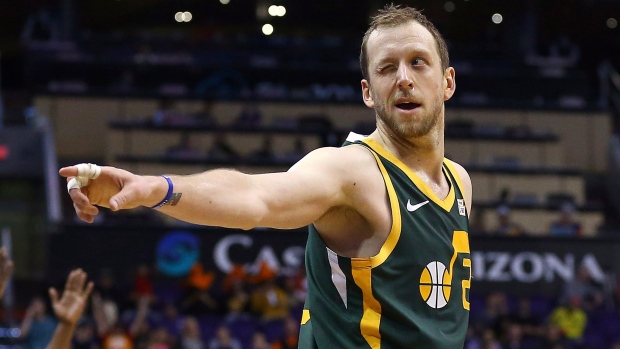 Three players were picked in the squad announced Wednesday to make their international debuts, including Jonah Bolden of the Philadelphia 76ers and Xavier Cooks, who played in Germany for Oliver Wurzburg before playing in the NBA Summer League with the Phoenix Suns. Jock Landale, who plays for Lithuanian club Zalgiris Kaunas and the Milwaukee Bucks in the NBA Summer League, also will make his debut for the Boomers.

Andrew Bogut and Chris Goulding are returning to the national squad after playing with Mills, Baynes, Dellavedova and Ingles at the 2016 Olympics in Rio de Janeiro, where Australia lost by one point to Spain in the bronze medal game.

Goulding is one of four players from Australia's National Basketball League selected in the team, joining Cameron Gliddon, Nicholas Kay and Nathan Sobey.

Ben Simmons of the 76ers and Thom Maker of the Detroit Pistons decided not to play for Australia in order to prepare for the NBA season. Also not playing for Australia are Dante Exum of the Utah Jazz (knee surgery) and Ryan Broekhoff of the Dallas Mavericks (family commitments).

"There are a number of guys getting their first experience of a World Cup, which is exciting for them and for us as a team," Australia head coach Andrej Lemanis said. "Of course, we also have a solid core of veteran players who understand what it will take for us to succeed in China."

Australia will play four warm-up matches — against Canada in Perth on Aug. 16 and 17 and against the United States on Aug. 22 and 24 in Melbourne.

The Boomers will play in Group H at the World Cup. They open against Canada on Sept. 1, play Senegal on Sept. 3 and take on Lithuania on Sept. 5.