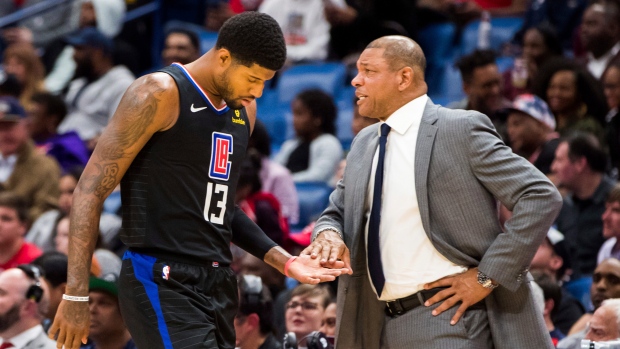 It was the rest of his game — from ball handling to defence — that concerned him.

Jrue Holiday scored 36 points and stole the ball from George three times in the final minutes to lead the New Orleans Pelicans to a 132-127 victory over Los Angeles on Thursday night.

“I thought I was terrible,” said George, who was limited to 24 minutes by early foul trouble but still scored 33 points.

“That’s the best my shoulders have felt in a really long time, so I knew coming into tonight shooting wouldn’t be a problem,” George added. “Just playing basketball is what I’m lacking right now.”

George was playing for the first time since signing as a free agent with the Clippers because he’d been recovering from procedures in May on his right shoulder and June on his left.

“A lot of breakdowns happened because of my lack of being out there with those guys,” George said. “I’m here to win games and I didn’t get a win. ... We had a chance to win tonight and a couple bad possessions in a row that we have down the stretch and we lose. That’s what I gauge good games and bad games on.”

Holiday, who had six steals in all, intercepted of Lou Williams’ attempted bounce pass in the final seconds to seal the victory. The play capped off a night in which Holiday scored 12 in the final 4:20, including a pair of pivotal 3s.

“It felt good,” said Holiday, who hadn’t scored as many as 20 points in any of his previous eight games. “It’s all about timing and rhythm. I felt like I got a little bit of that back tonight.”

Derrick Favours, in his first season with New Orleans, had 20 points and a career-best 20 rebounds in the first 20-20 game of his 10-year career.

“I’m starting to get comfortable now and just try to keep it going throughout the year,” Favours said. “It was a great game for me, a great game for the team, and we came out and played hard, but we just have to stay consistent.”

The Clippers played without Kawhi Leonard, who was being rested for the third time this season to ease stress on his sore knee after playing a night earlier in a loss at Houston. But the Pelicans were hardly sympathetic with starters Brandon Ingram (right knee) and Lonzo Ball (groin) sidelined, as well.

George’s 3 cut the Pelicans’ lead to 126-123 with 42 seconds left. But the Clippers left Jackson unguarded on the perimeter on the other end, and he took his time squaring up and connecting on his fourth 3 of the game to restore New Orleans’ six-point lead with 30 seconds left.

The Pelicans trailed 43-36 early in the second quarter when they put together the game’s first big run.

Favours scored six straight points on a free throw, a tip-in and his first 3-pointer of the season from the left corner. Holiday’s 3 soon after capped a 13-1 run which put New Orleans up 50-44.

Holiday added two more 3s, and Jackson another to widen New Orleans’ lead to 14 at 66-52. Holiday’s driving dunk and finger roll pushed his two-quarter point total to 24, and the Pelicans led 72-59 at halftime.

Los Angeles inched ahead when Williams hit a 3 and followed with a driving layup as he was fouled to make it 88-86.

Neither team led by more than eight after that.

Pelicans: Begin a weekend of back-to-back games at Miami on Saturday night, followed by a home date with Golden State on Sunday night.