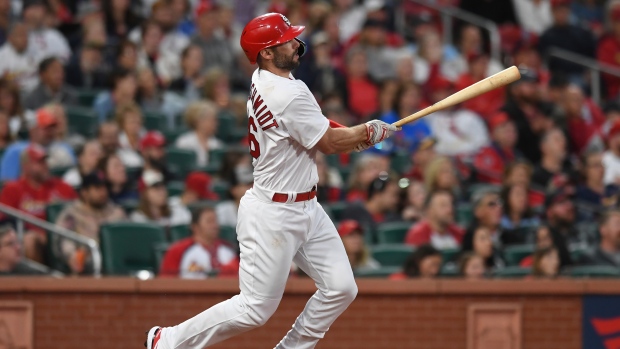 Dakota Hudson was pulled after 4 2/3 innings with the bases loaded in the fifth, after allowing five hits and four walks. Drew VerHagen (2-0) got Andrew McCutchen to ground into a forceout that ended the fifth.

Milwaukee had loaded the bases in the third before McCutchen grounded into an inning-ending double play.

Génesis Cabrera allowed one hit over two innings, Kodi Whitley gave up Keston Hiura's two-run homer in the ninth and Ryan Helsley struck out Mike Brosseau and retired Kolten Wong on a groundout for his third save, ending Milwaukee's three-game winning streak.

Helsley has not allowed an earned run in 14 appearances this season.

Brandon Woodruff (5-3) allowed two runs and two hits, then was removed while warming up for the fifth inning because of right ankle discomfort.

Goldschmidt put the Cardinals ahead in the third with his ninth homer, a two-run drive. He has reached base to 31 straight games, the longest streak by a major league hitter this season.

Harrison Bader scored on the home run after stealing second base. He stole two bases, leads the National League with 13 and has been successful on 16 in a row since last Sept. 8 against the Los Angeles Dodgers.

Pinch-hitter Edmundo Sosa had an RBI triple in the seventh and scored when Lars Nootbaar grounded into a forceout.

Brewers: OF Hunter Renfroe (right hamstring strain) jogged on the field pregame for the first time since Monday. Manager Craig Counsell said it was too soon to put a timetable on Renfroe’s return.

Cardinals: OF Tyler O’Neill (right shoulder impingement) lifted weights and threw prior to the game. He could go out on a minor league rehab assignment early next week.

RHP Adrian Houser (3-4, 2.98) starts for Milwaukee on Saturday. He is 4-3 with a 2.25 ERA in nine starts and three relief appearances against the Cardinals. LHP Matthew Liberatore (0-0, 7.71) makes his second career start for St. Louis after allowing four runs in 4 2/3 innings in his major league debut May 21 in Pittsburgh.