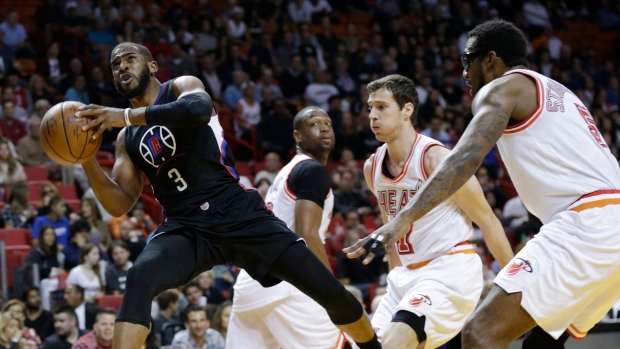 MIAMI - Chris Paul had the worst possible start to his shooting day.

His finish, however, was perfect.

Paul's consecutive 3-pointers in the final minutes were daggers to a Miami comeback, and his game-high 22 points helped the Los Angeles Clippers hang on to beat the Heat 100-93 on Sunday.

"I kept shooting it," Paul said, "because sooner or later it had to go in."

J.J. Redick scored 14 points, Wesley Johnson had 10 and DeAndre Jordan and Cole Aldrich grabbed 11 rebounds each for the Clippers, who won despite a 1-for-15 start from the field and swept the two-game season series with Miami.

Chris Bosh, Dwyane Wade and Goran Dragic all scored 17 points for Miami. Luol Deng added 15 points for the Heat, and Hassan Whiteside finished with 10 points and 10 rebounds off the bench.

"They did to us what we've been doing the last few games, just grinding an opponent," Heat coach Erik Spoelstra said. "That's what they did to us, then made the bigger plays down the stretch."

Paul was 0 for 7 in the opening period, the worst one-quarter shooting performance of his NBA career, and was 0 for 9 before he finally got a shot to fall. But his 3-pointers in the fourth snuffed out a Miami rally, and his lob that set up Jordan for a dunk was the clincher for the Clippers — who, after that horrid start, shot 55 per cent the rest of the way.

Redick made a layup on the game's first possession and the Clippers proceeded to misfire on their next 14 shots, but recovered to win for the 11th time in their last 13 road games, most of that with Blake Griffin sidelined by injuries.

"We're just trying to hold it down until our big fella comes back," Paul said.

Miami went to the oft-used strategy of intentionally fouling Jordan in the third quarter to slow the Clippers' offence. And while it worked to a point — Jordan went 3 for 10 from the free throw line in the quarter — Miami couldn't score. The Heat were 4 for 20 in the third, got down by as many as 11 and never led again.

"They made big plays down the stretch," Wade said. "That's the way we've been winning of late, so we can't be mad at that. We got a little taste of our own medicine."

Clippers: G Austin Rivers will miss four to six weeks with a broken left hand. For now, the Clippers aren't planning on making any roster changes to add depth. "We may have to make a decision but we're just going to try to ride it out," Doc Rivers said. ... Paul has faced the Heat 19 times, and his teams are 13-6 in those games.

Heat: Whiteside took his first charge of the season. ... Wade's first point of the day gave him outright possession of 41st place on the NBA's all-time scoring list. He came into the game tied with John Stockton at 19,711 points. ... Deng has scored at least 15 points in five of his last six games.

Clippers forward Paul Pierce played against the Heat for the 79th time, including playoffs. No other NBA player has opposed Miami more than Pierce, whose teams are 48-31 all-time against Miami.

His 1,597 points is the most anyone has scored against the Heat.

The Clippers were using a different plane than usual for their postgame flight from Miami to Philadelphia, for Super Bowl 50 reasons. They changed planes in order to have satellite television access so they wouldn't miss any of the Carolina-Denver game.

"It's really nice of the NBA to have us play today and then travel during the Super Bowl," Doc Rivers said. "Just really a great move. But at least we get to watch it."

Some teams in action Sunday didn't have such dilemmas — including Denver. The Nuggets won in New York on Sunday afternoon and play at Brooklyn on Monday, so they were staying put and could watch the Broncos without any issues.