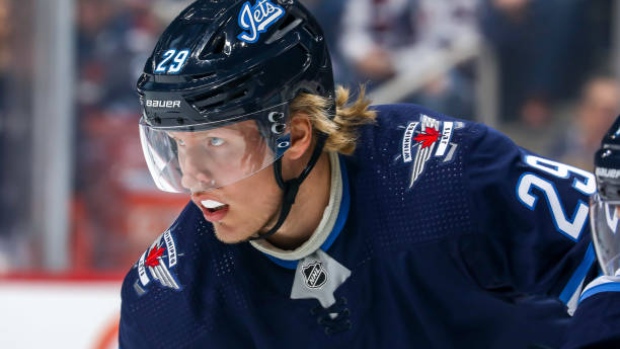 Winnipeg Jets head coach Paul Maurice declined to give a firm answer on Monday as to whether Patrik Laine or Mark Scheifele could return to the team's lineup for Tuesday's Game 3 against the Calgary Flames.

"We'll see tomorrow," Maurice said after his team's 3-2 win in Game 2. "I'm not looking to give up an advantage on any part of this now in the series. They didn't play today. We'll see how they come to the rink tomorrow."

Both players were injured during the team's 4-1 loss to the Flames in Game 1 of the series on Saturday. Scheifele appeared to suffer a left leg injury when he went awkwardly into the boards after getting tangled up with Calgary Flames forward Matthew Tkachuk in the first period, while Laine left the game in the third period favouring his arm.

Maurice praised the Jets’ effort in Game 2 in the face of adversity, which included Jansen Harkins scoring the opening goal in his first career playoff game.

“Those kind of backs-against-the-wall games don’t happen very often,” Maurice said. “I felt anyway that tension coming to the rink, that those are key players [out] and Mark Scheifele alone is just so important to all of the things that we do in our game … That could’ve been a real devastating event. It was a special time for our team to rally.

“I’m proud that we won the game in the manner that we did with the injuries that we had, because it will give the people that are not familiar with our season a little glimpse of what we’ve been doing all year.”