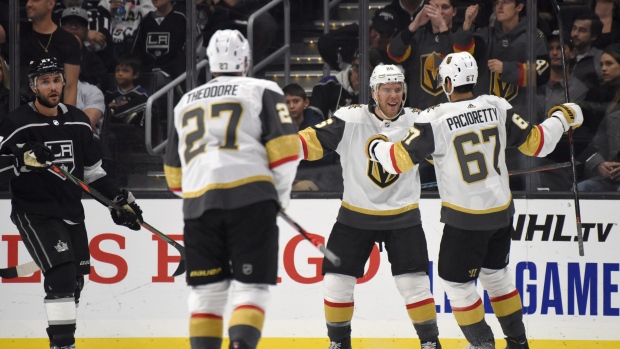 LOS ANGELES — The Vegas Golden Knights thought their power play had been playing well, despite a 3-for-17 start this season.

A perfect 3-for-3 game with the man-advantage against the Los Angeles Kings proved the Knights right.

"We want to be capitalizing on the power play, or at least getting some sustained pressure," Pacioretty said. "The last couple games we haven't capitalized on it, but I thought tonight (we) had some good zone time, we were moving the puck around, and guys were finishing. That's what you want from your power play."

Reilly Smith and Mark Stone also scored, and Marc-Andre Fleury made 36 saves as the Golden Knights swept their first set of back-to-back games.

Stastny redirected Pacioretty's pass between Jonathan Quick's legs to put the Golden Knights up 3-1 at 14:51 of the second period. He made it 4-1 with a one-timer on a feed from Jonathan Marchessault 2:09 later. It was Stastny's second career game with two power-play goals, and he finished with four points.

"It was obviously a horrendous night for that unit, and it needs work," McLellan said. "Individuals need work, the system needs work. . They took advantage of fatigue, and they picked us apart. Eventually it was in our net. We never got relief on our penalty kill ever."

Those breakdowns made a bad night for Quick worse as he allowed five goals on 36 shots. Quick has allowed 19 goals on 92 shots in his three appearances this season, and he has allowed at least five goals in five of his last seven starts.

McLellan would not discuss how he plans to distribute starts between Quick and Jack Campbell over the final three games of the homestand, but he said Quick played his best game of the season.

Quick's latest poor outing stood in sharp contrast to another strong performance from Fleury, who made several standout saves in the first period to allow Vegas to get back to the dressing room with a 2-1 lead on goals by Smith and Pacioretty. Fleury's best stop was a blind kick save on Anze Kopitar's one-timer during a Kings power play.

"I was screwed there," Fleury said. "It was a screen in front of me and I didn't see it fast. I just threw it out there and hoped for the best and got lucky a little bit there."

Dustin Brown pulled the Kings within 4-2 at 4:24 of the third period, but Stone pushed the lead back to three goals by scoring 17 seconds later.

Golden Knights: Host the Nashville Predators on Tuesday to open a two-game homestand.

Kings: Host the Carolina Hurricanes on Tuesday in the third game of a five-game homestand.