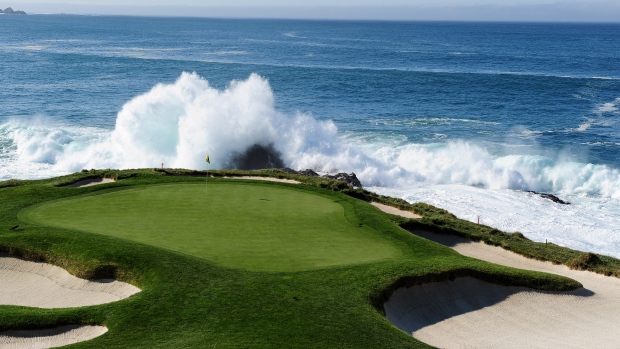 No Bill Murray dancing with a fan in the bunker. No Wayne Gretzky playing alongside Dustin Johnson. No Tony Romo showing off his mad golf skills.

The AT&T Pebble Beach Pro-Am, one of the highest-profile tournaments on the PGA Tour schedule, is doing away with amateurs this year in another nod to the necessary safety protocols of the COVID-19 pandemic. It was previously announced that the event would be held without fans.

This year’s event will be just for the 156 PGA Tour professionals and will take place at just two courses, Pebble Beach Golf Links and Spyglass Hill Golf Links, instead of the customary three.

"This was a very difficult decision, but the right one given the recent surge in COVID-19 cases," said Bill Perocchi, chief executive officer of Pebble Beach Company, in a statement released by the PGA Tour.

"Since the beginning of the pandemic, we have put the health and safety of our guests, employees and community first. We know this will create challenges for many local charities this year, but we are confident that the incredible giving associated with this event will continue well into the future."

The tournament is celebrating its 75th year in 2021 and Nick Taylor of Abbotsford, B.C., will be the defending champion. Last year, he held off Phil Mickelson down the stretch to earn his second PGA Tour win.

The tournament traditionally welcomes high-profile celebrities from the entertainment, sports and business world who play alongside PGA Tour professionals. Among those who regularly play are comedian Ray Romano, singer Justin Timberlake and quarterback Tom Brady. The cost to enter as an amateur participant is approximately $30,000.

The event began in 1937 and was called the Bing Crosby National Pro-Am. Crosby, a talented actor, singer and golfer, rallied his friends from the entertainment world to come and play, giving the tournament some profile. The format has remained in place. It became known as the Crosby Clambake.

The first event, just 18 holes and played at Rancho Santa Fe Golf Club near San Diego, was won by Sam Snead who collected $500.

In 1947 the tournament moved to Monterey, Calif., and was played at Pebble Beach.

So far, the Waste Management Phoenix Open is the only West Coast tournament to state it will have fans on site, limiting it to 5,000 per day.