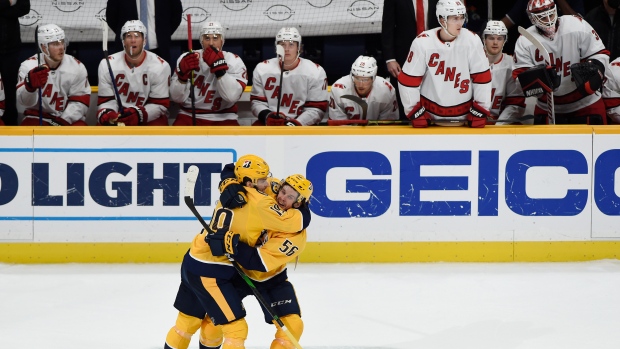 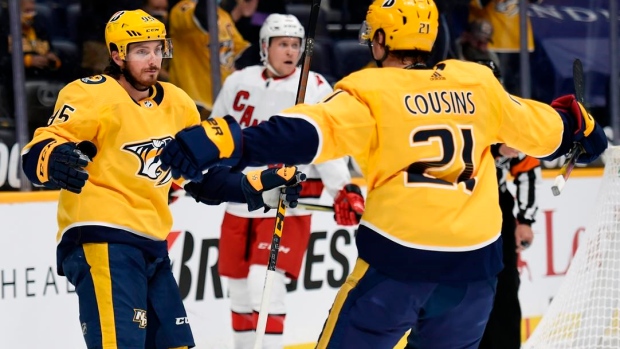 NASHVILLE — Pekka Rinne took a lap around the ice as teammates watched, tapping their sticks against the boards. The Nashville Predators surrounded their 38-year-old goalie for a group hug, and he was the last to leave the ice.

If this was his final start in Nashville, Rinne made it a night to remember in an otherwise meaningless game.

Rinne made 30 saves for his second shutout of the season as the Predators finished the regular season by beating the Carolina Hurricanes 5-0.

The goalie tied Tom Barrasso for No. 19 in NHL history with his 369th victory in his first start since April 10. Now a backup to fellow Finn Juuse Saros in the final year of his contract, Rinne notched his 60th career shutout as fans chanted his name early and often before the postgame celebration.

“It was unbelievable,” Rinne said. “It caught me by surprise. ... It was so cool. I don’t know whose idea it was that all the players came out on the bench. I really appreciate it. Love these guys. ... I tried to tell the boys, ‘Let’s go back to the locker room. We have playoffs coming up.’”

Even teammates who didn't dress came out to hug the goalie who led Nashville to the 2017 Stanley Cup Final.

Rinne told reporters after the game he has no concrete plans for his future. But his fiancee and infant son watched at the glass during warm-ups. Rinne also said he was sure his relatives watched from Finland, unable to travel because of the pandemic.

“I told him it's going to be awkward when he comes back next year, and we do it again in Game 82,” forward Matt Duchene said.

Duchene scored twice, and Ryan Johansen and Tanner Jeannot each had a goal and an assist for Nashville. Rocco Grimaldi scored a short-handed goal.

Nashville clinched the fourth seed in the Central Division on Saturday night with a 3-1 win over Carolina, the Predators' first this season over the division champs. The Hurricanes have lost two straight by a combined 8-1 score to the team they're facing in the playoffs.

“We’re going to flush it,” Carolina coach Rod Brind'Amour said. “I think we played 56 games, 55 we were in every one. Some of the losses, we were right in every one of those. This is the one game the whole year we weren’t in. It’s kind of flushed for me to be honest with you.”

With nothing on the line, both teams rested several players before their first-round playoff series.

Grimaldi gave Rinne the only lead he'd need at 2:51 of the first, grabbing the puck in the neutral zone and racing up to the front of the crease before stopping and beating Petr Mrazek with a backhander. Duchene scored 98 seconds later, skating across the crease and flipping a backhander past Mrazek.

Duchene scored again at 4:19 of the second as the extra attacker on a delayed penalty making it 3-0.

Rinne looked like the goalie who won the 2018 Vezina Trophy. He made 10 saves in the third, one where he tossed his stick as the Hurricanes attacked with some tic-tac-toe passing. During the timeout, fans gave him a standing ovation.

“A little bit of Dominik Hasek there,” Rinne said.

The forward skated on the top line with Filip Forsberg and Ryan Johansen and posted his second two-goal game of the season. He also scored twice at Florida on Feb. 4 and has six goals in 34 games this season.

Johansen's power-play goal snapped Carolina's streak of killing 18 straight penalties, including 16 over the past seven games. That streak was Carolina's longest since March 2017 and tied for the seventh-longest in franchise history.

Earlier Monday, the Hurricanes recalled defenceman Joey Keane from Chicago of the American Hockey League. They also got back forward Jordan Martinook after he missed nine straight games with a lower-body injury.

That came two days after the Hurricanes saw defenceman Jaccob Slavin exit in the first period with an unspecified injury, which Brind’Amour described afterward as a tweak. Brind’Amour said Slavin is day to day.

Game 1 of the first-round series with Carolina hosting the Predators.