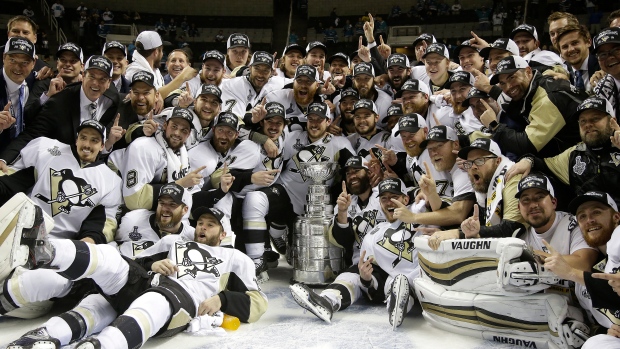 Exactly seven years to the day since their last Cup victory, Crosby and the Pittsburgh Penguins hoisted the game's greatest prize once more, this time beating the San Jose Sharks in six games. Crosby said he wasn't thinking about 2009 all that much when he held the trophy for the second time.

"I was just thinking about how hard it was to get to this point and just trying to enjoy every second of it," said Crosby. "It's not easy to get here and having won seven years ago at a young age you probably take it for granted a little bit."

He and the Penguins came full circle from their last win.

Much like that last Stanley Cup victory, when Dan Bylsma replaced Michel Therrien, the Penguins replaced their coach mid-season and morphed into a different team. Pittsburgh was suddenly playing faster, scoring more and controlling the puck more often after Mike Sullivan took over for Mike Johnston in mid-December.

"We skated with puck, we skated without puck, we always skate," Evgeni Malkin said of the shift under Sullivan.

Sunday's Cup-clinching victory was six months to the day after the coaching change.

Crosby and Kris Letang especially took off under Sullivan as did Phil Kessel, who soon became a feared creator of offence on the team's third line and a dominant post-season force. Sullivan's intention upon his promotion was to play to the strengths of the team's best players.

"Speed in all of its forms is what I envisioned with this group," Sullivan said during the final.

The Penguins went 33-16-5 after Sullivan took over, while sitting near the top of the league in puck possession. And indeed, their speed was evident all throughout the Cup final, both in terms of how quickly they moved the puck and their feet.

A no-name defence beyond Letang was especially effective, holding San Jose's top weapons largely in check. Joe Pavelski and Joe Thornton were held to one goal and three assists combined in the series.

"The one thing that pretty much everyone said, from the beginning of the year, is 'Oh wow, they got Phil Kessel, their forwards are great, but man their defence is a huge question mark, their defence will be their downfall, their defence is terrible'," said defenceman Ian Cole. "I think we did a fantastic job shutting them down."

Pittsburgh's depth on that defence and up front was prominent, too.

The Penguins had 12 different scorers in the final, although Crosby, the Conn Smythe Trophy winner and team captain, never had a goal.

Kessel, who led the Penguins with 22 points, was among the key additions made to the roster over the course of the last year, joined by Carl Hagelin (16 points in the playoffs), Nick Bonino (18 points), and Trevor Daley, among others.

Contributions from young talent from inside the organization also reaped rewards with those like Matt Murray, Conor Sheary and Bryan Rust making notable impacts.

Murray matched a rookie post-season record with his 15th win in Game 6, while Sheary scored a pair of goals in the final, including the overtime winner in Game 2. Crosby was one of only five Penguins to also play for the Cup-winning team in 2009, joined by Letang, Malkin, Chris Kunitz and Marc-Andre Fleury, who served as Murray's backup all spring.

"When you have so much turnover the last couple years like we had it's not easy just to throw a bunch of guys together and develop that chemistry, that trust," Crosby said. "It doesn't happen overnight but when you look at the group and how many new players we brought it was pretty special what we were able to do."

Despite not scoring, Crosby was a force throughout the final, especially early in the series and then again in Game 6. The Penguins captain set up Letang for the 2-1 go-ahead goal, finishing with four points (all assists) against the Sharks and 19 points in the playoffs.

"I look at this as a total team effort," he said of his Conn Smythe win. "I tried to work hard every night and do my job just like everyone else."

Hired as the Penguins general manager in June 2014, Jim Rutherford engineered many of the moves that helped Pittsburgh back to the Cup, including undoing some of his own mistakes such as the Johnston hiring.

Beginning the season as the Penguins AHL head coach, Sullivan's story in Pittsburgh reads much like Bylsma seven years ago. Now the Buffalo Sabres head coach, Bylsma was also coaching in Wilkes-Barre when he replaced Therrien behind the NHL bench. He, too, posted a sterling mark (18-3-4) as the Penguins scored in droves, before eventually guiding the Penguins to their third Stanley Cup.

Sullivan's Penguins trailed in only one game of the final, outshooting the Sharks 206-139 while controlling play often enough with devastating speed and depth.

It was the summation of a sharp turnaround.

"I thought we had a lot of fight and we found a way," Crosby said.