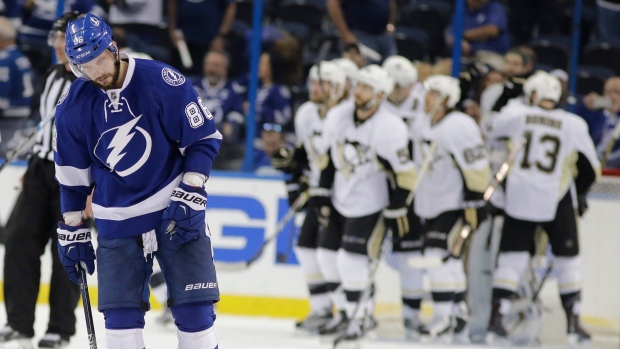 TAMPA, Fla. — Sidney Crosby and Co. kept pressing and shooting until the Pittsburgh Penguins finally imposed their will.

Carl Hagelin snapped a scoreless tie late in the second period and Matt Murray had 26 saves for the Penguins, who took a 2-1 lead in the best-of-seven series and proving that they're far from a one-man show.

"You don't win consistently without depth," Crosby said after scoring the winning goal for the second time in three nights.

Game 4 is Friday night at Amalie Arena in Tampa.

Crosby's power-play goal off a pass from Evgeni Malkin restored a two-goal lead midway through the final period. Kunitz also beat goalie Andrei Vasilevskiy from the right circle to make it 4-1.

"It was a 4-on-3 so we had a one-timer on either side and (Malkin) was in a good spot to shoot it at the top of the ice," Crosby said. "He's just smart with the puck and he's going to make the right decision. I don't think I called for it but maybe I did."

Tyler Johnson and Ondrej Palat scored for the Lightning. They have lost two straight after winning the series opener in Pittsburgh. The defending Eastern Conference champions were outshot 48-28, including 38-16 over the last two periods.

"Every team is good offensively when they play in their system," Pittsburgh defenceman Kris Letang said. "Our system is to play north-south and get the puck deep. When we do that we have a good chance to win."

Vasilevskiy won Game 1 in relief of the injured Ben Bishop and the Penguins took Game 2 in Pittsburgh when Crosby scored the first overtime playoff goal of his career less than a minute into the extra period.

The Lightning were outshot by a combined 76-41 in the first two games, but weren't as concerned with that disparity as much as by a lack of good scoring chances — a problem they hoped to rectify by coming out more aggressive to try to put more pressure on Penguins goalie Matt Murray on Wednesday night.

And for a while, they did.

Murray, though, had 12 saves in the opening period, but the Lightning couldn't keep up the pace. Pittsburgh controlled the puck for much of the second period, taking 21 shots to Tampa Bay's six and finally breaking through against the 21-year-old goaltender when Kessel chased down a loose puck before flicking a shot from the right circle.

Vasilevskiy, who had stopped Kessel on a breakaway earlier in the period, blocked the shot directly toward Hagelin, who tipped it in with 10 seconds remaining before the second intermission.

"It was a great second period," Crosby said. "I thought we created a ton of chances, and to get one that late in the period felt good."

Kessel's team-leading seventh goal this post-season gave the Penguins a short-lived two-goal lead. Johnson countered for Tampa Bay just 14 seconds later, taking a pass from Nikita Kucherov and barrelling in on Murray, who was unable to stop a shot that bounced off his upper body before continuing into the net.

Vasilevskiy, making his third career playoff start, finished with 44 saves. He's stopped 115 of 123 shots since taking over for Bishop during Game 1.

"Vasilevskiy has been excellent. He has really kept us in (the last two) games," Lightning defenceman Anton Stralman said.

The Lightning have lost consecutive games for the first time this post-season.

They've been one of the NHL's moist resilient teams, though, and aren't counting themselves out.

"We have been to three playoffs together and we have been in every different situation," coach Jon Cooper said. "Up two, down two, up 2-1, down 2-1, so it's nothing we haven't seen before."