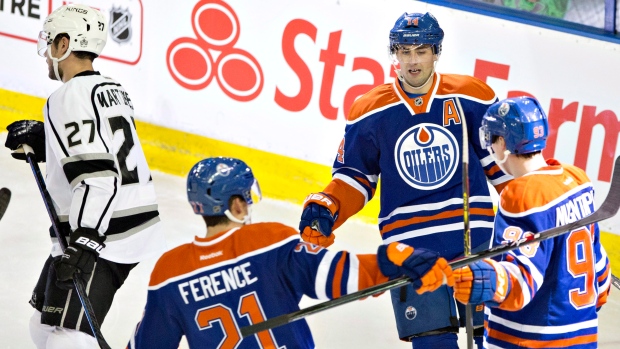 EDMONTON - The Edmonton Oilers haven't had enough wins this year to complain about the manner is which they get one.

David Perron scored the shootout winner as the Oilers snapped a nine-game losing streak, their second-longest losing skid of the season, with a 3-2 victory over the defending Stanley Cup champion Los Angeles Kings on Tuesday.

The Oilers led 2-0 heading into the third — on goals from Matt Hendricks and Ryan Nugent-Hopkins — before allowing the Kings to claw their way back and send the game to overtime and the eventual shootout.

While Nugent-Hopkins said it wasn't great to see another team come back on them, getting a win in extra time after going 0-7 previously this season is a nice feeling.

"We can still do a much better job pushing back when a team comes at us hard like that, but at the same time, it was a big game for our morale," he said. "It was great to finally go to a game that goes to extra time this season and come away with the two points."

The Oilers (8-22-7), won for just the second time in their last 22 games. It was also the second win of the season for Edmonton against a Western Conference opponent, upping its record to 2-18-6 in that category.

Newcomer Derek Roy, who was picked up in a trade with Nashville on Monday, said he could tell the Oilers were a team in desperate need of something going right.

"Getting a win is the main thing right now," he said. "We just need to build on it. This should give us some confidence to make plays late in games. We can't allow ourselves to be under siege like we were in the third period. The more experience that we get knowing how to win, the better we are going to get."

"It does feel really good. I'm not sure it has sunk in yet," Nelson said. "It is more or less a relief. It's a relief for everyone to get this win under our belts and now we can build the result."

Drew Doughty and Jake Muzzin responded for the Kings (18-12-8), who lost their second game in as many nights and fifth straight on the road.

"This one is disappointing, just like the last one (a 2-1 loss in Calgary)," Muzzin said. "We have to come out hungrier, more desperate, harder. I don't think we're coming out with the right attitude that we need to win hockey games right now.

"We shouldn't be in that situation where we need goals late, we have to get our goals early."

Edmonton kicked off the scoring four-and-a-half minutes into the opening period as Roy made an impact in his first game with the Oilers, making a heads-up feed to Hendricks, who blasted a shot from the slot glove-side past Kings starting goalie Jonathan Quick.

Roy left the game soon afterwards when his ankle was cut by a skate and he missed the remainder of the first period before returning to start the second.

Edmonton made it 2-0 just prior to the midway point of the second period after some strong forechecking in the Kings zone. Nugent-Hopkins made a kick pass to Taylor Hall and followed up on the play to get the puck back and score his 11th of the season.

Oilers goalie Ben Scrivens upheld the two-goal lead with three minutes left in the second on a huge glove save on a point blast from Alec Martinez.

The Kings outshot the Oilers 22-16 through 40 minutes.

Los Angeles broke Scrivens' shutout bid midway through the third, although it took a while to determine. Doughty's rocket from the point was originally thought to have hit the cross bar and the game continued on for another 34 seconds before a stoppage in play allowed a video review, which determined the puck had gone off the camera inside the net.

Kings head coach Darryl Sutter said he had a feeling that it would end up being a goal.

"Drew said it was," he said. "Carter said something about the sound of it, he said it didn't sound right. We knew they were going to review it and at the first whistle we knew the league was going to call back."

The Kings tied the game with Oiler Justin Schultz in the box for a high-sticking call as Marian Gaborik swung behind the net during a scramble and fed the puck in front to Muzzin, who scored on the short side with just 2:25 remaining in the third.

Scrivens made 39 saves in the victory while Quick stopped 21 shots in defeat.

There was an unusual situation in the shootout as the Kings complained about Scrivens having orange tape on the end of his stick and the official went out and taped over it with white.

Notes: It was the second of five meetings this season between the two teams. The Kings defeated the Oilers 6-1 on Oct. 14 at Staples Center. The Kings entered the game with seven consecutive wins over Edmonton. … Matt Fraser also made his Oilers debut after being picked up on waivers from the Boston Bruins. … It was the first game that Oilers interim head coach Todd Nelson had the bench to himself, as GM Craig MacTavish returned to the press box. … The Oilers held a moment of silence prior to the game in recognition of the nine people who were killed in what appears to be a case of domestic violence in Edmonton Monday night and Tuesday morning.