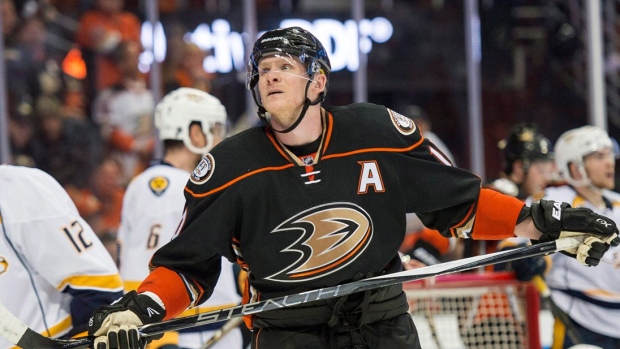 After 14 seasons, a hockey lifetime in one spot, that’s how many games Corey Perry fell short of becoming the first Anaheim Ducks player to skate in 1,000 games with the franchise.

That’s the one thing that left a sour taste in Perry’s mouth after he was bought out of the final two years of his deal by the Ducks on Wednesday.

“It stings,” Perry told TSN in his first public comments. “How many guys have played 1,000 games with one team? Not many. I sit here and say, well, with some of the injuries, I would’ve already been there. I was so close.”

With the Ducks embarking on a rebuild, Perry said he wasn’t entirely surprised by the decision. The 2011 Hart Trophy winner knew changes were coming. Ducks GM Bob Murray called it one of the toughest decisions he’s made in 44 years in the NHL.

“It was just one of those things. When I was told, I didn’t expect that to come out of their mouths,” Perry said. “I respect their decision. It’s tough when you’ve been there for so long, it’s all you know. But I don’t have a bad word to say about the Ducks and how they’ve treated me over the years. Everyone in the organization was good to me.”

Make no mistake: Perry isn’t pouting. Now an unrestricted free agent for the first time in his career, Perry is hungry to chart a new path and chase a second Stanley Cup.

There will be no shortage of interest from contending teams in the former 50-goal scorer and proven playoff performer. He is one of 29 members of the exclusive Triple Gold Club – with a Stanley Cup, two Olympic gold medals and one World Championship gold medal – and he’s also won at the World Cup of Hockey and Memorial Cup.

“This has definitely lit a fire in me,” Perry said. “I want to win again. I’ve felt that feeling at every level and I want to feel it again. I watch teams win the Stanley Cup every year and I see how much emotion comes up when they win. It’s the hardest trophy to win and you need on-ice leadership and experience. I will get back to the player I used to be.”

Perry, 34, is in the unique position to bet on himself. With the salary cap not rising as sharply as expected, he can opt to sign a one-year performance bonus-laden contract with a small salary cap hit that will be beneficial for teams – and mutually beneficial if he performs.

Those type of deals are typically reserved for players aged 35 and over in the NHL’s Collective Bargaining Agreement. But Perry can sign one because he missed more than 100 days of the league’s 185-day season last year rehabbing a tough knee injury.

The Ducks owe Perry $11 million over the next four years, so whatever he earns next season will be a double dip. Anaheim saved $4 million with the buyout.

“I have no doubt Corey can still contribute to a team,” TSN director of scouting Craig Button said. “His hands and burning desire to score in and around the net are attributes that have always defined him. Those qualities can serve a team in a meaningful way and in an environment that compliments his skills, could be significant to a team’s fortunes.”

The knee hampered Perry for years, helping to explain his down production, failing to hit 20 goals in each of the last three seasons. He collected just six goals and four assists in 31 games last year once he returned to Anaheim’s lineup on Feb. 2.

“When I came back, maybe I wasn’t totally ready,” Perry said. “I had surgery on Sept. 28. It was a six-month recovery and I was back in four months.”

Perry said he is “finally at 100 per cent.” The road back wasn’t easy. He was in the pool for physio three days after surgery and swam five days a week for two to three months before he could then use the bike and run. They were 10 to 12-hour days at the gym.

Perry has been skating twice a week since May in London, Ont., with noted power skating instructor Kathy McLlwain - the same coach who works with Canucks forward Bo Horvat and other NHLers. It’s a new wrinkle in Perry’s routine. In prior off-seasons, Perry would typically stay off the ice until August. He also made a change in his fitness instructor.

“I’m doing a lot more already than in previous years,” Perry said. “When you go in to a new team, you want to go in at your best. You have to make your own way, new teammates, new coaches, and earn your respect. I’m going to go in with a purpose.”

Perry only knows one way. That purpose has always been to wreak havoc in front of the opposition’s net with a hard-nosed and honest brand of hockey. He has ground out 372 career goals with a relentless, high-skill and highly annoying attack.

“I am that pesky, in-your-face guy who will be in and score goals in the dirty areas,” Perry said. “That’s who I am. That’s who I’ll always be.”