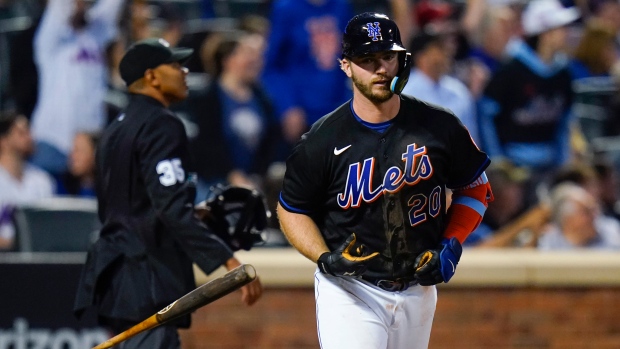 Down 7-0 to Carlos Carrasco, the Phillies made it close by scoring six times in the sixth inning, capped by Garrett Stubbs' three-run homer.

Mets relievers Drew Smith, Joely Rodríguez, Seth Lugo and Edwin Díaz held on, helping the NL East leaders beat Philadelphia for the seventh time in 10 games this season. Díaz got his 11th save in 14 chances.

Alonso has 45 RBIs this season and has especially battered the Phillies, with five home runs and 17 RBIs in 10 games against them.

The All-Star slugger tied the team record of 28 RBIs in the month of May set by Willie Montañez in 1978. Alonso gets four more games to match the Mets record for RBIs in any month, set by Hall of Famer Gary Carter with 34 in September 1985.

Alonso had a sacrifice fly in a three-run first, a two-run homer — his 12th — in the third and an RBI double in the fourth.

Alonso made a nifty diving stop at first to prevent Philadelphia from scoring early, one of six grounders he fielded for outs. He also caught pinch-hitter J.T. Realmuto’s foul popup to end the eighth with runners on second and third.

Shut out by Carrasco (5-1) on two hits going into the sixth, Philadelphia rallied. Infield hits by Rhys Hoskins and Alec Bohm set up RBI singles by Bryce Harper and Nick Castellanos.

A run-scoring grounder by Jean Segura and a two-out walk to Odúbel Herrera brought on lefty Chasen Shreve, and the lefty-hitting Stubbs lined a drive into the right-field seats.

The Mets added a run in the bottom half on Starling Marte's RBI grounder.

Francisco Lindor scored three runs for the Mets, and Marte had two hits and scored twice. They each stole a base.

With storms all around Citi Field, the Phillies brought back Bailey Falter (0-2) from Triple-A to make the start. On his first pitch, Brandon Nimmo hit a routine grounder to rookie shortstop Bryson Stott, who threw it away for an error.

Phillies: Struggling LHP José Alvarado was sent to Triple-A Lehigh Valley to make room for Falter. The 27-year-old Alvarado was 0-1 with a 7.62 ERA in 17 games. Lefties were batting .333 against him. “Hopefully, this is a short timeout and he'll be dominant again," manger Joe Girardi said.

Mets: Right-handed reliever Yoan López had his three-game suspension cut to one game and served the penalty. He was recalled from Triple-A Syracuse before the game and sat out. López had appealed after Major League Baseball ruled that he intentionally threw at Phillies slugger Kyle Schwarber on May 1. ... RHP Steve Nogosek was recalled from Triple-A.

Mets: OF Travis Jankowski is expected to miss 6-8 weeks because of a broken left hand. He had surgery and a screw was inserted. Manager Buck Showalter said Jankowski appeared to get hurt while making a diving catch. ... RHP Jacob deGrom (shoulder) will travel with the team when it begins a road trip to the West Coast in early June. The two-time Cy Young Award winner hasn't pitched this season.