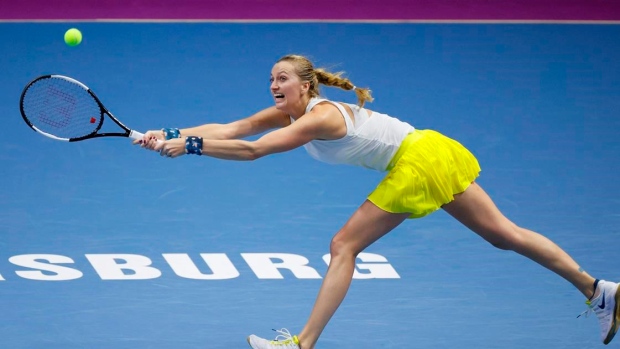 "I’m really proud of the way I’m fighting and the way I can turn these matches around," the Greek player said.

That sets up a semifinal on Saturday against Kazakhstan's Elena Rybakina, who beat Oceane Dodin 6-7 (5), 7-5, 6-2 in their quarterfinal.

The other semifinal pits second-seeded Kiki Bertens against Ekaterina Alexandrova, who advanced by walkover after Kvitova's withdrawal.

Kvitova said the unspecified illness bothered her on Thursday during a three-set win over Alison van Uytvanck.

“I wasn't feeling well during my match yesterday and hoped I would feel better today, but unfortunately, that's not the case," Kvitova said.

Bertens, who won the St. Petersburg title last year, needed nearly two hours to win her quarterfinal 6-4, 7-6 (3) against qualifier Anastasia Potapova. Bertens was 5-2 down in the second set before winning five of the following six games to force the tiebreak.