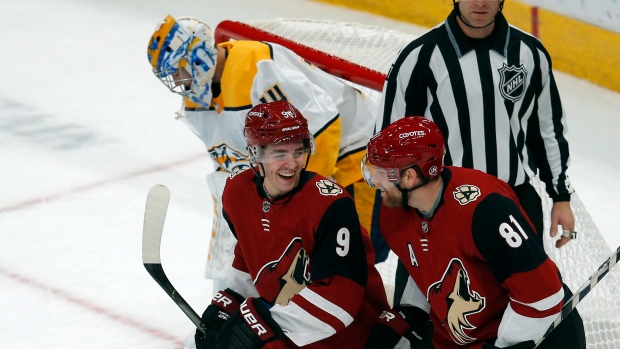 GLENDALE, Ariz. — The way Phil Kessel had been playing for the Arizona Coyotes at the start of the season, scoring a goal was just a matter of time.

The veteran forward put it all together Thursday night, scoring his first two goals for Arizona, and Christian Dvorak scored his third goal in two games as the Coyotes beat the Nashville Predators 5-2.

Arizona (3-2-1), 3-0-1 in its last four games, went 3 for 6 on the power play. Darcy Kuemper stopped 23 shots and set a franchise record by allowing two goals or less in 12 consecutive games. Jakob Chychrun added his first goal of the season, and Carl Soderberg also scored.

Dante Fabbro and Nick Bonino scored for the Predators, who have lost two of three.

The Predators were without leading goal scorer Filip Forsberg, who came in with five on the season. Forsberg took a shoulder blow to his head in the Predators' 5-2 win at Vegas on Tuesday and was a game-time decision with a lower body injury.

Arizona lost defenceman Jordan Oesterle 17 seconds into the game when a shot was deflected off the back of his head. Oesterle was taken to a hospital for a precautionary examination after feeling dizzy, and needed stitches.

The Coyotes didn't seem affected. Dvorak sent a shot from a difficult side angle high into the net past Juuse Saros at 6:06.

Kessel, a two-time Stanley Cup winner acquired in a trade with the Pittsburgh Penguins in the off-season, finished off a power play give-and-go with Clayton Keller, scoring at 10:34 of the first.

Kessel scored again on a power play for a three-goal lead, with Keller assisting at 5:03 of the third. Nick Schmaltz and Derek Stepan also had two assists.

"He wasn't even panicking. He was getting his looks," Coyotes coach Rick Tocchet said of Kessel. "We've got to get him the puck in those areas, that's where he's a home run hitter."

The Predators made it 2-1 at 3:13 of the second with Fabbro's goal. Ryan Ellis assisted on both Predators goals, giving him a team-high eight assists.

Saros blocked a breakaway attempt from the Coyotes' Derek Stepan at 9:13 of the second. Saros finished with 27 saves.

Chychrun, on another power play, scored on a left-handed wrist shot at 14:27. Schmaltz delivered him a no-look pass that led to the goal.

The Predators managed only three shots in the first period. They are 1-1-6 in their last eight games in Arizona.

"It's more of a team number than a 'me' number," Kuemper said of his record. "I didn't have to do a whole lot. I thought this was maybe our best game yet."

Bonino scored late in the third, then Soderberg put the game out of reach with an empty-net goal at the 17:10 mark.

The Predators felt the Coyotes' speed was a factor.

"We were out-worked, out-competed and out-skated. That's really it," Predators coach Peter Laviolette said. "We didn't put anything into it, we didn't get anything out of it."

NOTES: The Coyotes celebrated Noche De Los Yotes, a tribute to Hispanic heritage, on Thursday night. Earlier in the day, the team announced the formation of the franchise's first ever Latino advisory board, which is headed by majority owner Alex Meruelo. Meruelo has said he intends to build more fan interest in the Coyotes within the Phoenix area's large Hispanic population. ... The Coyotes played 59 minutes, 43 seconds of the game with five defencemen after Oesterle's injury. They were already without their top defenceman, Niklas Hjalmarsson, who is on injured reserve with a cracked fibula and could miss several months. ... F Michael Grabner played in his 600th career NHL game. ... Nashville's streak of five straight games with a power-play goal came to an end.