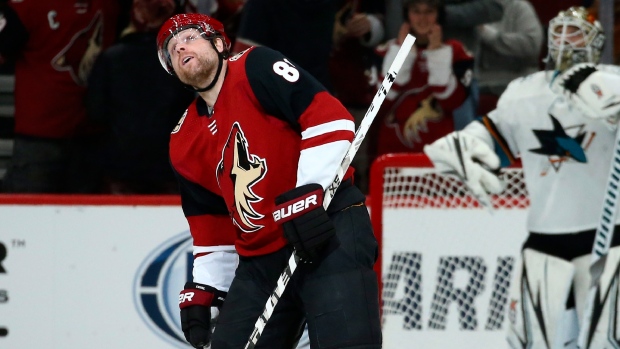 Phil Kessel, formerly of the Pittsburgh Penguins who was acquired in a trade last June, and Taylor Hall, a three-time All-Star picked up via trade with New Jersey last month, each scored twice, carrying the Coyotes to a 6-3 win over the San Jose Sharks on Tuesday night.

Lawson Crouse and Conor Garland also scored, and Garland and Derek Stepan had three points each. Arizona scored a pair of empty-net goals and ended a three-game skid with its fourth win in five home games. Adin Hill stopped 25 of 28 shots.

“We've got a good group here. We play hard, and when we get in these tough situations, I think we bounce back pretty well,” Kessel said. “We got the puck in and went after them and we created a bunch of chances.”

Kevin Labanc, Timo Meier and Evander Kane scored for the Sharks, who are 4-2-1 in their last seven games. Labanc and Kane each had an assist, and Aaron Dell had 34 saves.

Stepan stole the puck near centre ice along the boards in the first period and fed Kessel, whose wrist shot went into the upper part of the net past Dell at 12:03.

The Coyotes made it 2-0 about at 5:01 of the second period, with Kessel scoring easily on a power play. Garland got an assist when he tracked down a wide pass and fed Christian Dvorak, who spotted Kessel all alone.

Kessel got his 10th and 11th goals of the season, which made him the eighth Coyote with 10 or more goals. He also recorded his third two-goal game of the season.

The Sharks answered at 6:42 when Kane worked the puck around the back of the net and backhanded a pass into the crease, where Labanc was waiting for a deflection and slid the puck past Hill.

It was Labanc’s 11th goal of the season.

San Jose tied it after being inches away from a 3-1 deficit. Dell lost his stick but kept Clayton Keller’s shot from going in, and the Sharks worked the puck to Patrick Marleau, who fed Meier for his 16th goal at 9:55 of the second.

Hall put the Coyotes ahead 3-2 with 2:46 to go in the second, getting his stick on Jordan Oesterle’s shot and re-directing it past Dell.

“'Hallsy' hates to lose, you can tell," Coyotes coach Rick Tocchet said of Hall, who has 13 points in 14 games with Arizona. “He's starting to fit in. He knows the system. He's asking a lot of questions lately. You can just tell that he's finding his groove.”

When the Sharks pulled Dell for an extra attacker, the Coyotes made them pay with the late empty-netters for Hall and Garland inside the final two minutes. Garland raised his team-leading goal total to 16.

“This is a big game for us and I think that we got away from how we played in the last couple of weeks,” Sharks coach Bob Boughner said. “We gave out too many high danger scoring area chances.”

NOTES: Marleau appeared his 832nd consecutive game. ... D Brent Burns, who missed time in the team’s previous game with a minor injury, played Tuesday in his 519th straight game. ... Coyotes F Brad Richardson left the game with a lower body injury. ... F Michael Grabner saw action in his second game in the past eight. ... Stepan has a point in five straight home games. ... Arizona is 20-4-1 when scoring first this season. ... With three blocked shots, D Niklas Hjalmarsson became the 21st player in NHL history to record 1,500 in his career.