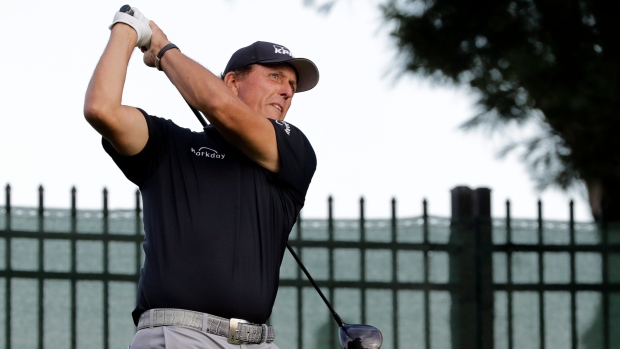 RIDGEDALE, Mo. — Phil Mickelson chose to make his PGA Tour Champions debut at Ozarks National this week so he could avoid a two-week break right in the middle of his preparations for the U.S. Open at Winged Foot.

If he was going to show up, Mickelson thought, he might as well win.

He closed with a 5-under 66 on Wednesday to reach 22 under, leaving him three shots clear of Tim Petrovic. The wire-to-wire victory made Mickelson the 20th player to win on the 50-and-over-tour in his debut, not to mention gave him some much-needed confidence after a missed cut at The Northern Trust knocked him from the FedEx Cup Playoffs.

“I really enjoyed playing here, enjoyed seeing the guys again, and they were so accommodating and fun, and it was just fun for me to compete," said Mickelson, who plans to take 10 days off before heading to the Safeway Open for what he hopes is his final U.S. Open prep. “I got to shoot scores and compete. The competition here was really strong. It was good for me to get off to a good start and compete.”

The three-round tournament in the Ozarks of southwest Missouri may prove to be even more important if the wildfires are still raging in California. The Safeway Open will take place at Silverado in Napa, and Mickelson expressed the same fear as tournament organizers that the event could be affected.

Regardless of whether he tees it up again, Mickelson's game sure looked sharp as he heads toward the U.S. Open.

He began the final round, which was moved up to an earlier start because of approaching bad weather, with a birdie on the first hole. He added another at the fourth before driving the par-4 fifth — “Gosh darn it!” he yelled, thinking his drive had ended up in the green-side bunker — and rolling in a 25-footer for an eagle.

Mickelson added three straight birdies, making the turn to reach 23 under and putting the 54-hole scoring record on the PGA Tour Champions in danger. David Frost shot 25 under at the 2010 3M Championship.

But after stringing together a few pars, a three-putt bogey on the 14th ended that thought, and it left Petrovic just three shots out of the lead. The longtime journeyman had reached 19 under with a birdie on the 14th and was starting to provide the kind of pressure that Mickelson had not faced all week.

Petrovic wasn't able to make another birdie, though, and he dropped a shot after a poor pitch on the par-4 finishing hole.

“You know, sometimes you just run into a buzz saw,” Petrovic said. “I ran into a Phil buzz saw this week because he made a lot of birdies. I think yesterday I shot 31 on the front and I don't think I picked up as hot, maybe one. Today I got it going again on the front and we were almost laughing. When he was on the front, he drove that part-4 — you know, he said it's like, 340 (yards) in the air to make eagle. We're like: ‘OK, all right. That’s enough.'”

The performance left the regulars on the PGA Tour Champions with some mixed feelings. They loved having the affable Mickelson playing with them this week, just like the old days, not only for the competition but also for the added exposure it brought the tournament — a late add to the schedule because of the coronavirus pandemic.

They also would rather not see him anytime soon if he's going to flirt with some more scoring records.

“Who was going to be good enough this week with that rat here?” Rocco Mediate asked. “It's so cool to have him out. We played a practice round on Sunday (and) it actually helped me play good because you go out and play with Phil or play against Phil, you've got to have it. It was fun to play a good practice round having to play because I kept on carrying it."

Kevin Sutherland closed with a 63 to finish third at 16 under. Robert Karlsson was another shot back while Mediate was joined by Steve Stricker at 14 under, a full eight shots behind the new guy on the scene.

“This isn’t surprising whatsoever, anything he does,” Mediate said. “Him and Tiger (Woods), the same thing: Nothing they do surprises you. And you’re seeing it here. I don’t know how many under he is, but it’s easier said than done to come out here, you’re supposed to win. We’re really good out here, he knows that. And he’s done it, that’s pretty cool.”