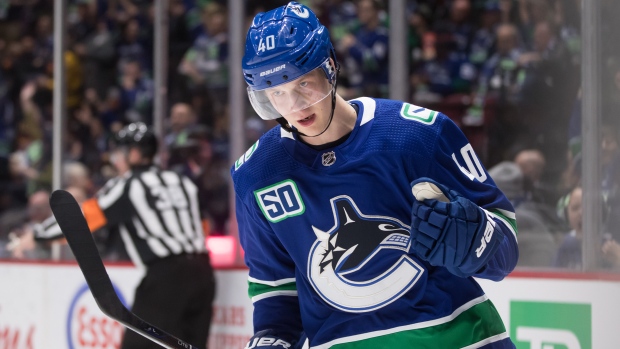 VANCOUVER – The Vancouver Canucks (1-2) shoot for a second straight victory when they host the Philadelphia Flyers (2-0) at Rogers Arena tonight.

The Canucks are coming off an 8-2 victory over Los Angeles in their home opener on Wednesday night. The offensive outburst was the first time since 2003 the Canucks scored eight goals on home ice. Against the Kings, Brandon Sutter led the way with a pair of goals while J.T. Miller had a goal and three assists establishing a career-high for points in a game in the process. Quinn Hughes opened the scoring with his first NHL goal while Elias Pettersson notched his first of the season. Josh Leivo, Alex Edler and Chris Tanev rounded out the Vancouver scoring.

In all, seven different players found the back of the net and 14 players found their way onto the scoresheet. The Canucks got three goals from defensemen and now have four goals from blueliners on the season. They didn’t get their fourth goal from a D-man until their 15th game last season.

The Canucks are expected to go with the same line-up they used on Wednesday. That means Loui Eriksson and Oscar Fantenberg will be the odd men out. Jacob Markstrom will make his fourth straight start in goal. The 29-year-old Swede has given up seven goals in his first three starts and sports a 2.37 GAA and 92.2 save percentage on the season.

With Markstrom as the central figure, Canuck penalty killers have been perfect successfully negating 10 opposition power plays so far this season. The Canucks and Arizona are the only teams in the league that have yet to surrender a goal while short-handed.

The Flyers are here to complete a wild start to their season. They opened the schedule last Friday with a 4-3 victory over Chicago in Prague. They made a quick stop at home and beat New Jersey 4-0 on Wednesday. And now they find themselves on the West Coast of Canada to open a three game trek that will also take them to Calgary and Edmonton.

Alain Vigneault holds the Canucks franchise record for regular season games coached (540) and coaching victories (313), but he’s on the other side of this match-up tonight. Hired on April 15, Vigneault is now behind the bench of his fourth NHL franchise (Montreal, Vancouver, New York Rangers and Philadlephia) and is the 21st head coach in Flyers history.

Bo Horvat’s cousin, Travis Konecny, is off to a hot-start leading his team with three goals and five points. He has scored in each of the Flyers first two games. Konecny, Kevin Hayes, Sean Couturier and Ivan Provarov had the Philadelphia goals on Wednesday and Carter Hart stopped all 25 shots he faced against the Devils for his first NHL shutout. The former Everett Silvertip puck stopper is 2-0 on the season with a 1.50 GAA and a 94.6 save percentage. He is also the youngest goalie in Flyers history to blank an opponent.

With just two games played and a shutout to their credit, the Flyers have allowed the fewest goals in the league (3) in the early going this season.

One key to Philly’s 2-0 start has been a power play that has struck three times on seven attempts (42.9 per cent). Last year, the Flyers finished 23rd in the league with 40 power play goals on the season.

Flyers captain Claude Giroux – who led the team with 85 points last season – has one assist in his first two games.

These teams split their two meetings last season with each team successfully defending home ice. The Canucks were 5-1 winners last December while the Flyers returned the favour in early February with a 2-1 victory. That was the night Alex Edler fell awkwardly and suffered a severe facial injury that kept him out of the line-up for 11 games. It was also the night Thatcher Demko suffered a knee injury in the pregame warm-up forcing the Canucks to recall then junior goalie Michael DiPietro from OHL Ottawa on an emergency basis.

The Canucks will make their lone visit to the City of Brotherly Love on November 25th.