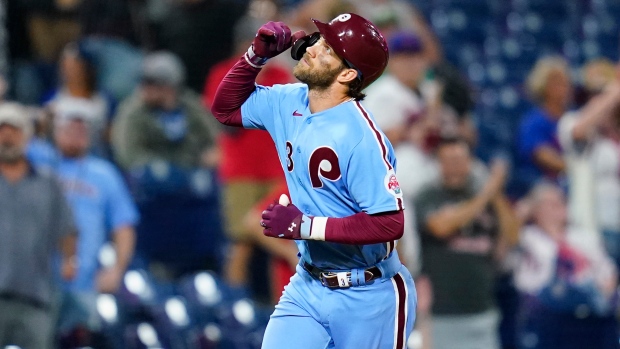 Harper overcame getting hit in the face with a 97 mph pitch from Génesis Cabrera of the St. Louis Cardinals on April 28 to bat .309 with 35 homers for Philadelphia. The 29-year-old led the major leagues with a .465 slugging percentage and 1.044 OPS, tied for the lead with 42 doubles and had 84 RBIs.

But the Phillies missed the playoffs for the third straight season since he signed a $330 million, 13-year contract. He earned a $500,000 bonus for winning MVP.

Harper was voted a unanimous MVP with Washington in 2015. He became the fifth player to win MVPs for different teams after Jimmie Foxx, Frank Robinson, Barry Bonds and Alex Rodriguez.