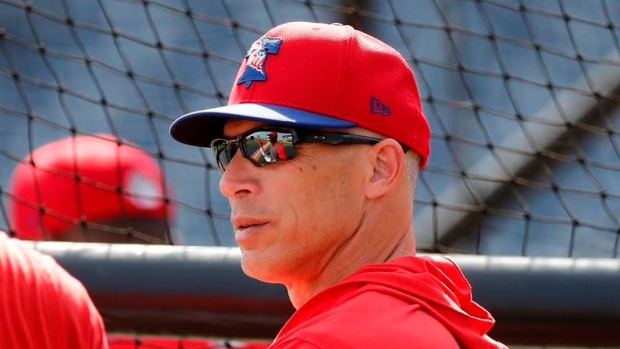 Girardi managed at Steinbenner Field on Wednesday night for the first time since he was fired by the New York Yankees following the 2017 season.

"Trying to think how many years I’ve been a part of the organization, four as a player, 10 as a manager, couple of years as a broadcaster, a bench coach," Girardi said. “It’s been a big part of my life. a big part of my kids’ lives. I’m really excited about my next chapter, love every bit of being in Philadelphia.”

Girardi was on three Yankees' championship teams as player in the late 1990's.

"He's a great manager," Yankees general manager Brian Cashman said. "He was a great Yankee. We were lucky to have him for as long as we did. We had a lot of winning together. He's won championships here as a player, he won a championship as a manager but he's even that much a better person."

Girardi said it took more than a year to get over his dismissal.

"It was hard for me," Girardi said. "It was an emotional time for me. There’s a lot of things that you think about. You’ve been there for so many years. Yeah, it was emotional."

Girardi last time in the dugout for the Yankees was during the 2017 AL Championship Series, won by Houston in seven games. The Astros won all four home games, and Major League Baseball concluded the Astros violated rules by using a video camera to steal catchers' signs during the 2017 season and post-season.

"That’s something I never really put a lot of thought into," Girardi said. "I moved on after that, as soon as the World Series was over. I know there’s been a lot brought to light, but we did everything that we could to combat that back then, and I know they’be taken even more steps. But I’ve never thought `what if.’ It doesn’t really do you any good."

The 2009 World Series win was the last for Yankees owner George Steinbrenner, who died the following July.