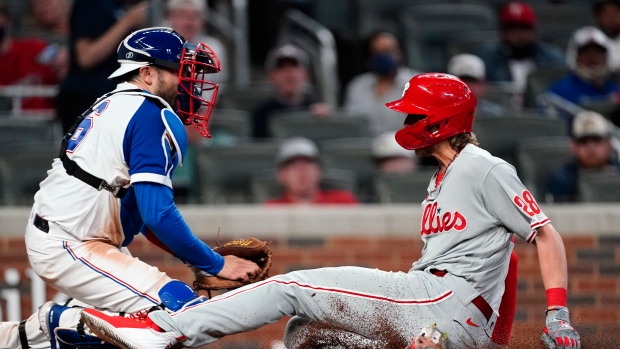 ATLANTA — Didi Gregorius hit a three-run homer in Philadelphia's four-run fourth inning and had the go-ahead sacrifice fly in the ninth to help the Phillies snap the Atlanta Braves’ four-game winning streak with a 7-6 victory Sunday night.

Alec Bohm doubled off Braves closer Will Smith to begin the ninth, advanced to third on a bunt and scored to make it 7-6 on Gregorius’ fly to shallow left. Marcell Ozuna’s throw bounced twice before Bohm was initially called safe — even though it appeared he didn’t get his foot on the plate against catcher Travis d’Arnaud’s tag attempt.

The play was reviewed and upheld, prompting fans at Truist Park to throw debris into the outfield and causing the grounds crew to come out to pick up the trash.

“I was called safe,” Bohm said when asked if he thought he was out. “That’s all that matters.”

D'Arnaud was disappointed in the decision made by the video review.

“A nice two-hop, hit me right in the chest," D'Arnaud said. “I leaned over, applied the tag, blocked the plate after I caught the ball. Initially, I didn't know if he was safe or out just because I had to lunge to the right to make sure I blocked the plate, but after watching the replay it didn't look like his foot touched the bag, from any angle we saw.

“Afterward, I saw it from even more angles and it didn't look like his foot touched the plate."

Bryce Harper and Rhys Hoskins homered for the Phillies, who had lost three of four. Héctor Neris faced the minimum in the ninth to earn his second save and has a 1.86 ERA with five consecutive saves converted and 25 strikeouts, a span of 19 1/3 innings, since last Aug. 28.

Ronald Acuña Jr., Freddie Freeman and Ozzie Albies homered to power the Braves. Acuña, on a hot streak over his last six games, went 9 for 13 in the three-game series and homered twice.

Homering for the second straight night, Harper took reliever Nate Jones deep with an opposite-field solo shot to left to make it 6-5. Acuña’s fourth homer, coming in the bottom half of the inning to make it 6-all, sailed 428 feet into centre field off reliever Sam Coonrod.

Freeman’s fourth homer, coming off starter Matt Moore’s changeup, cleared the fence in centre to force a 5-all tie in the fifth.

“It was a great game," Bohm said. “Any time they'd score, we'd answer. Any time we'd score, they answered. That's a good win."

The Braves went up 3-0 in the first. Acuña reached on an infield single, and Albies hit his first homer before d’Arnaud doubled and scored on Dansby Swanson’s single.

Philadelphia made it 3-1 in the second when J.T. Realmuto doubled and scored on Jean Segura’s sacrifice fly.

In the fourth, Hoskins’ second homer went to left, trimming the lead to 3-2, before Gregorius crushed a curveball from starter Drew Smyly into the right-field seats for a three-run homer that gave the Phillies a 5-3 lead.

Gregorius credited Bohm and Jean Segura for getting on base ahead of his three-run shot.

“I came up big for the team with the three-run homer, but that inning didn’t happen without Seggie doing his job, and I tried to hit the ball deep enough so Bohm could score," Gregorius said. “That’s the best part of the game right there.”

The Braves answered with a run to make it 5-4 in the bottom of the fourth when Cristian Pache doubled, advanced on a bunt and scored on Acuña’s sacrifice fly.

Braves manager Brian Snitker had no immediate timetables for RHP Mike Soroka (right Achilles) and RHP Chris Martin (right shoulder inflammation). Soroka has been out since last Aug. 3 and has fully recovered from surgery, but still has some inflammation. Snitker said Martin, who was placed on the injured list Saturday, is not a candidate for surgery.

Philadelphia placed RHP Archie Bradley on the 10-day injured list with a left oblique strain. Bradley allowed two hits and one run and was charged with the loss in one-third of an inning on Saturday.

“It’s not something I can pinpoint,” he said. “It’s not one particular act that I felt it on. Obviously, I wasn’t very happy with (Saturday’s) results.”