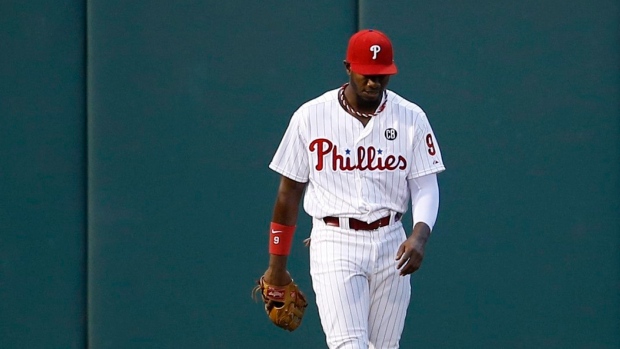 PHILADELPHIA - Domonic Brown hit 23 homers in the first half last year, played in the All-Star game and showed why the Philadelphia Phillies considered him an untouchable prospect.

Now they're waiting for him to do it again.

Brown has struggled this season at the plate and in the outfield. Fans are running out of patience, giving him an earful of boos this week. The organization might be tired of waiting, too. The addition of three-time All-Star Grady Sizemore, who signed a minor-league deal earlier this week, could mean Brown might losing his starting job soon.

"Well, Domonic is our left fielder as we speak," manager Ryne Sandberg said this week.

That's not much of an endorsement.

Brown wasn't in the starting lineup for the second straight night Friday when the Phillies opened a four-game series against Atlanta. Though Philadelphia was six games under .500 going into the game, they only trailed NL East-leading Washington by five games and the second-place Braves by four games.

"It's just been a frustrating year for myself," Brown said. "I mean, we still have three months to go, but I have to pick it up for sure."

Brown was batting .218 with five homers and 38 RBIs entering the weekend. He has only 17 extra-base hits and his slugging percentage (.321) is seventh-worst in the majors.

"He's really developed an uppercut swing," Sandberg said. "He's missing his pitches and it puts him in the hole a lot of at-bats."

Then, there's his defence.

Brown has been a liability in the outfield throughout his young career. He misplayed a liner that led to three runs in a 3-2 loss to Miami on Wednesday.

Before that pitch, Brown was standing upright. He froze when the ball was hit and took a step in instead of going back. It sailed over his head for an RBI double and the next batter hit a two-run double. After that inning, Brown made sure he was in ready position when pitches were delivered.

"I had a good conversation with him about making adjustments and then trying to apply them during the game, both on the offensive and defensive side of things, being prepared out there on defence for every pitch, knowing the game situation, getting good jumps on balls," Sandberg said.

Some players take their offensive woes into the field. That can cause mental lapses and lack of concentration.

"If you feel good offensively, definitely you feel good the other way around," Brown said. "But you can't take your at-bats to the field. Bottom line, point blank."

The tall, slender Brown, a left-handed hitter and fielder, was selected by the Phillies in the 20th round of the 2006 amateur draft. By 2009, he showed five-tool ability. So, when the Phillies unloaded prospects in trades to acquire Roy Halladay, Cliff Lee, Roy Oswalt and Hunter Pence, Brown was the one guy they refused to move.

Going into 2011, Brown was considered the game's fourth-best prospect by Baseball America behind Bryce Harper, Mike Trout and Jesus Montero. But he failed to win the starting job in right field and didn't became an everyday player until 2013.

Brown put on a spectacular power display last May when he hit .303 with 12 homers and 25 RBIs in 27 games. He followed that up with six homers and 21 RBIs in 28 games in June.

It's been downhill since.

Brown had just six homers and 26 RBIs over the final three months last season. The first three months this year have been worse for him.

If that confidence doesn't translate into production, Brown might end up in Triple-A.

Sizemore began the year as Boston's starting centre fielder after missing the last two years following various injuries. He batted .216 with 10 doubles, two triples, two home runs and 15 RBIs for the Red Sox before he was released on June 18. Sizemore is playing at Triple-A Lehigh Valley, but is expected to get called up soon.

"I'd like to have more production in the outfield," Phillies general manager Ruben Amaro Jr. said. "It's pretty simple. If we think after watching him play in Lehigh Valley he can help, then we'll bring him."