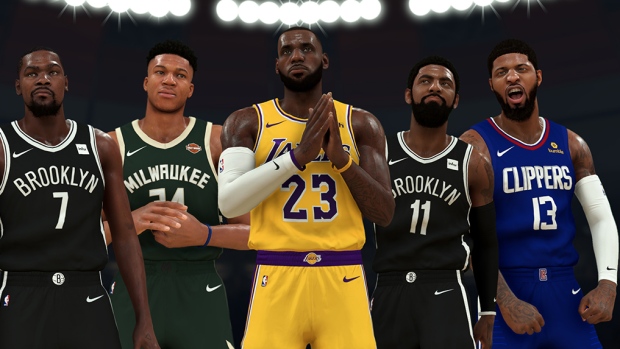 That's what Patrick Beverley said confidently after taking down Andre Drummond in the NBA 2K20 tournament quarterfinals Thursday night to advance to the semis.

The Los Angeles Clippers point guard won his second-round matchup 69-62 using the NBA-leading Milwaukee Bucks, while Drummond chose the Philadelphia 76ers. Beverley demolished Hassan Whiteside of the Portland Trail Blazers 84-54 in the first round back on April 3.

Beverley is one of four players remaining alongside teammate Montrezl Harrell and Devin Booker and Deandre Ayton of the Phoenix Suns.

Beverley will take on Ayton while Harrell will battle Booker, meaning the finals could be either an all-Clippers or all-Suns matchup. Both the semis and finals will run as a best-of-three.

Booker, the highest-rated player remaining in the field at 86 overall, has had a relatively easy road to the final four thus far, taking down Michael Porter Jr. 85-75 in the first round and Rui Hachimura 71-55 in the quarters for a pair of double-digit wins. Meanwhile, his teammate beat Zach LaVine comfortably in the opening round but had to sweat a lot more Thursday night, winning a closely-contested contest with No. 2 seed Trae Young 73-66.

"They are legitimately good. Alongside playing the game a ton and having unbelievable hand-eye coordination, they are great 2K players who know the intricacies of offensive basketball philosophies and could hang with the best in the world," NBA 2K expert Ronnie Singh, better known as Ronnie 2K, told The Athletic's Gina Mizell.

Finally, Harrell defeated Indiana's Domantas Sabonis 71-53 in round one and former dunk contest champion Derrick Jones Jr. 71-66 in the quarterfinals.

Kevin Durant entered the tournament as the No. 1 seed with a personal rating of 96 overall but was bounced 78-62 by Jones Jr. in the opening round.

The winner of the tournament will claim $100,000 to donate to a coronavirus charity of his choice.