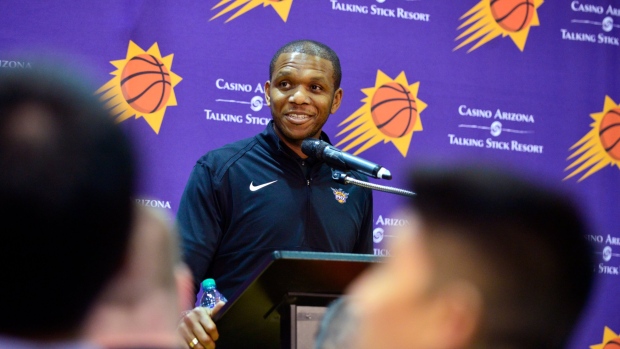 James Jones is staying in the desert.

The Phoenix Suns have signed their general manager to a multiyear extension, the club announced on Tuesday.

“We’re fortunate to have a great basketball mind leading this team," owner Robert Sarver said in a statement. "James not only has tremendous instinct for identifying talent, but he has an innate ability to compose a roster that is deep with complementary players who make each other better, on and off the court. He came in with strongly-held beliefs on what it would take to nurture a championship culture and what it should mean to wear a Suns jersey. We promised fans an elite NBA franchise that would steal their hearts and make them proud and that’s what we have built under James’ leadership.”

“I’m just fortunate and I’m extremely grateful to be a part of it,” Jones told The Undefeated's Marc J. Spears. “It’s more than I could have ever dreamed of to be a part of a team like this, some of the best professionals across sports. And to have the success that we’re having, it’s so much fun. When you step into this job, you never really know what it’ll be like, you hear stories about what it looks like, what the profession looks like, and the arc of a career in the front office or in an organization.”

A native of Miami, the 41-year-old Jones previously spent 14 seasons in the NBA as a player out of Miami, including two with the Suns.

Jones won three NBA titles over his career with two coming with his hometown Miami Heat and the other with the Cleveland Cavaliers.