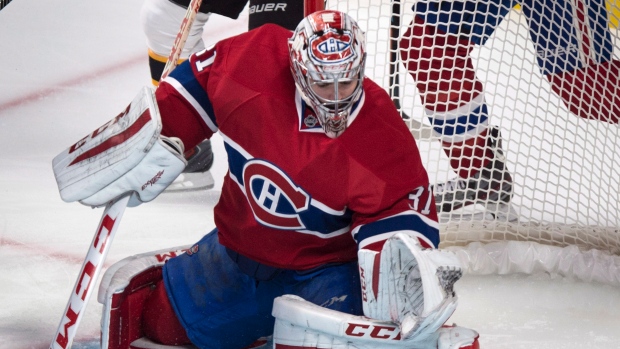 Suddenly depleted in net, the Colorado Avalanche try to avoid a third straight loss on Saturday night as they conclude a four-game road trip against the Montreal Canadiens.

You can listen to the action starting at 7pm et/4pm pm on TSN Radio 690 Montreal.

The road has not been kind to the Avalanche's netminders. They placed starter Semyon Varlamov on injured reserve Thursday due to a groin injury and then saw backup Reto Berra leave just 2:46 into that night's game against the Ottawa Senators.

Calvin Pickard, earlier recalled from Lake Erie of the American Hockey League, made 23 saves on 27 shots faced in his NHL debut as Colorado lost 5-3. He will get the start tonight for Colorado.

Alex Tanguay, John Mitchell and Gabriel Landeskog all scored first-period goals for the Avalanche, but the Senators scored three times in the third period to spoil Pickard's debut.

"Pick made some big saves when we needed them and it's too bad we couldn't get the win for him," said Avs forward Matt Duchene.

It marked the second straight game that Colorado blew a third-period lead as they were up by a goal on Tuesday at Toronto before losing 3-2 in overtime.

The Avalanche were forced to recall Sami Aittokallio from Lake Erie and he'll likely backup Pickard tonight as Colorado concludes a stretch of five of six on the road to open the season.

Montreal, meanwhile, opened the campaign with a 3-1-0 road trip and then won its home opener 6-4 over rival Boston on Thursday. It was the first meeting between the clubs since the Canadiens eliminated the Bruins in seven games during last season's Eastern Conference semifinals.

Brendan Gallagher and P.A. Parenteau both scored twice, while Max Pacioretty had a goal and two assists.

"One shot just hit me, but playing with these guys, it's just easy," Gallagher said.

Jiri Sekac added his first career goal, David Desharnais and Alexei Emelin had two assists each and Carey Price made 25 saves in the win.

The Habs, who continue a four-game homestand, snapped a string of four straight losses to the Avalanche with a 6-3 win at home in the most recent encounter on March 18 of last season.