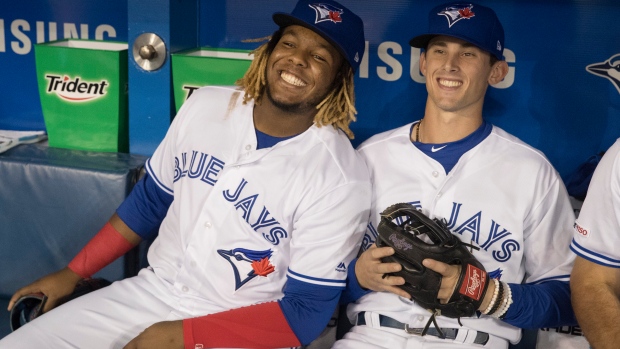 TORONTO — The first real rebuilding year for the Toronto Blue Jays is playing out exactly as expected in the early going.

In many individual cases, the results haven’t been what Jays fans or the front office was hoping for, but the process has been by the book.

Coming into the season, 2019 was always about sifting through the options and learning more about what’s already on the roster and then, eventually, what they've got in the system.

With June on the horizon, the deck chairs are already being shuffled in a somewhat predictable way.

The outfield picture has changed dramatically in the blink of an eye, with only Randal Grichuk remaining from the opening day depth chart.

Teoscar Hernandez and Billy McKinney were given their run, and they eventually ran out of leash.

In Hernandez’s case, it was the swing-and-miss in his game leading to too many strikeouts and the enticing power that he showed last season when he hit 22 home runs evaporated.

In McKinney’s case, not enough hard contact and a pull-happy approach were what factored into the 24-year-old lefty’s limp slash line and Friday demotion to Triple-A Buffalo.

That’s not to say either won’t adjust, figure things out, and arrive back on the scene as a more complete player, but they failed to capitalize on massive opportunities to make themselves a part of the future plan, and those don’t come around often.

Benefiting from their failures is Lourdes Gurriel Jr., who’s had his own share of hiccups this season.

Over the winter, the Blue Jays organization tried hard to make everyone believe the 25-year-old Cuban could handle shortstop.

That plan was quickly discarded and second base became the focus.

Throwing issues submarined that idea in April, and a new plan emerged — one that most evaluators thought would be the eventual outcome, anyway — with Gurriel in a super-utility role.

A major part of that blueprint is using Gurriel in left field, where he showed up Friday night when he was recalled from Triple-A Buffalo after a glove-focused five-week sojourn.

Summoned alongside Gurriel is one of the more intriguing pieces to the rebuild puzzle in Cavan Biggio, the second bloodline player fans have been clamouring to see, and it made a little history Friday night when he and Vladimir Guerrero Jr. became the first major-league teammates with hall of fame fathers.

Biggio didn’t want to leave out Bo Bichette’s name and the trio seems well aware of their importance to the rebuild, even if they won’t outwardly say the future is riding on them.

“I think it’s an unspoken thing, you could say that,” Biggio said Friday when asked about the significance of being in the same lineup as Vladdy Jr. at the highest level of baseball. “Throw in Bo’s name, too.

“We all know how special and how bright the future can be here in Toronto and it’s just kind of all starting.”

As Guerrero continues to show why he was the top prospect in baseball with stunning exit velocities and above-average production already as a 20-year-old, Biggio is being given an opportunity to prove he’s an important part of the future, either at second base or as another super-utility type who can also dabble in the outfield, first base, or even third base in a pinch.

Unlike Vladdy Jr., whose ceiling is about 530 km away in Cooperstown, what Biggio ultimately becomes is up for debate.

A fifth-round pick in 2016, Biggio has spent the last three years improving by leaps and bounds and essentially recalibrating his expected ceiling on a yearly basis.

Is he a glue guy or a perennial all-star?

“He gets better every day,” Atkins said. “How much better he has gotten in the infield is remarkable, but it’s not surprising once you get to know him and see how committed he is and you meet his family … and you see (reasons) why he’s having so much success.

“You’re right. He’s a really hard guy to put a ceiling on.”

With Guerrero at third, Biggio at second, Danny Jansen behind the plate and Gurriel patrolling left field on Friday night, you can start to see a handful of the pieces to the rebuild laid out on the table.

But the process of putting the complete jigsaw together has only just begun.​