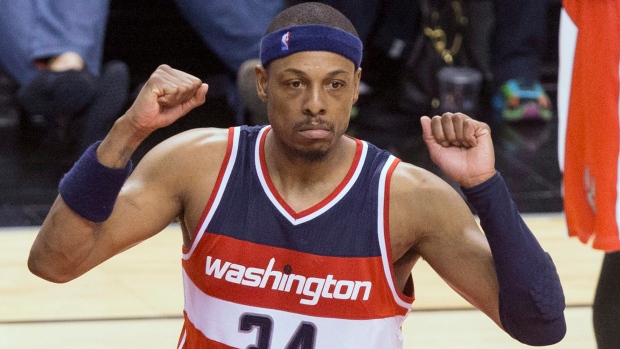 WASHINGTON - Paul Pierce is opting out of the final year of his contract with the Wizards and will become a free agent Wednesday.

The veteran small forward signed a two-year deal with Washington last summer that included a reported $5.5 million player option for the 2015-16 season.

Pierce told The Player's Tribune website of his decision, and the Wizards confirmed his move Saturday.

The Wizards reached the Eastern Conference semifinals in Pierce's first season with the team. Washington went 46-36, the franchise's most victories since 1978-79, then swept the Toronto Raptors in the first round of the playoffs before losing to the Atlanta Hawks in six games.

Pierce starred during the post-season with several clutch moments, including a jumper at the buzzer to beat the Hawks in Game 3. He appeared to have made a game-tying 3-pointer in the final second of Game 6, but replay revealed the shot came after the buzzer.

Pierce averaged 11.9 points and 4.0 rebounds in 73 starts during the regular season.

He played his first 15 seasons with the Boston Celtics, winning an NBA championship in 2008, before being traded to the Brooklyn Nets before the 2013-14 season.