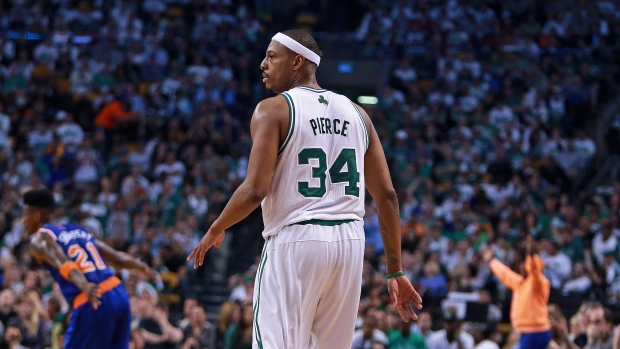 BOSTON — Paul Pierce is retiring as a member of the Boston Celtics.

The Celtics announced Monday that they have signed Pierce to a contract so the 10-time All-Star can retire with the team where he spent his first 15 seasons in the NBA.

Pierce helped bring Boston a championship in 2008 as part the "Big Three" of Kevin Garnett and Ray Allen. Pierce previously said that last season would be his final one in the NBA.

Drafted by Boston as the 10th overall pick in 1998, Pierce started a 15-season run that is behind only John Havlicek's 16 seasons for the most played in a Celtics uniform.

"It's an honour to have this opportunity to once again call myself a Boston Celtic," Pierce said in a statement. "The organization and city took me in and made me one of their own, and I couldn't imagine ending my career any other way. I'm a Celtic for life."

Celtics manager partner Wyc Grousbeck said the franchise was "honoured" that Pierce had chosen to retire as a Celtic.

"We congratulate Paul on a Hall of Fame career, and look forward to seeing his number raised to the rafters of TD Garden," Grousbeck said.

Pierce was traded to Brooklyn in 2013, spent the 2014-15 season in Washington and the past two seasons with the Los Angeles Clippers and former Celtics coach Doc Rivers.

But Pierce never hid his affinity for the Celtics even after he and Garnett were dealt away in 2013, ending the Big Three's run in Boston a year after Allen left to join the Miami Heat.

Now Pierce, who had the longest tenure in green and white of the three, will make his exit.

The 2008 NBA Finals MVP was showered with cheers whenever he returned to the Garden, including in what turned out to be his final game there in February.

Pierce had just one basket in the Clippers' 107-102 loss, but it was just as memorable as many of the buzzer-beating shots that earned him folk hero status during his time in Boston.

Current Celtics All-Star Isaiah Thomas backed off Pierce in the closing seconds, with the game out of reach, to let Pierce knock down one more basket on the parquet floor that he made his personal playground so many times.

As the ball fell through the net, fans erupted.

"I'm glad I was able to cap it off," Pierce said afterward. "At least I can say I put one last bucket in."