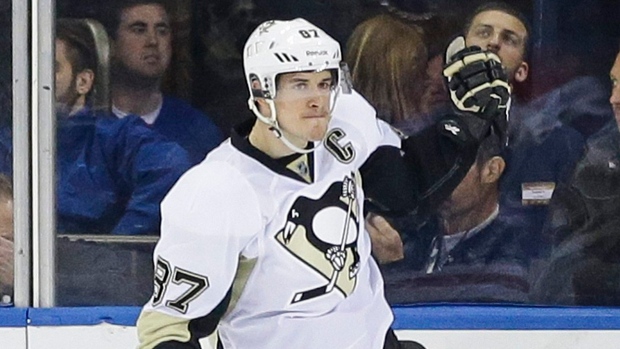 Few topics in hockey have been studied as rigorously as the relationship between aging and player performance.

The seminal work on the subject was completed by Gabriel Desjardins, whose 2010 study into peak performance years is still cited today. Desjardins' study, which focused on forwards and their per-game scoring rates, found that peak age for a player in today's NHL is around 25.

Eric Tulsky improved upon that study in 2014 by accounting for player usage and survivorship, but the findings were still reasonably similar. A forward in his mid-20s is likely in the prime of his career.

Why are these findings so important? For starters, the NHL's current contract system bars young players from reaching unrestricted free agency, generally, until they are in their mid-to-late 20s. By the time these forwards hit the open market, many have already played through the prime of their careers on relatively cap-friendly contracts.

Despite knowing the effects of aging, general managers routinely line up to pay these players for the lofty numbers they put together in their golden years, ignoring the frequency with which many of these players see production nosedive at the tail end of their next contracts.

I sense that, to some degree, general managers believe the aging curve is far less harsh. And that perhaps raw scoring doesn't tell the whole story, since it's prone to a bit of fluctuation. I don't know if it's a valid concern, but I do know that the above two authors both focused on scoring rates.

It led me to wonder if other metrics regressed in similar fashion. We know forwards score less (per 60) as they age, but are they generally less threatening, too? Do their shot attempt totals and scoring chance totals drop off in similar fashion, or is there more to this story than what Desjardins and Tulsky originally found?

To answer this question, I grabbed shot attempt totals and scoring chance totals (shot attempts taken in the 'home plate' area of the ice) for all players age 18-38 at even-strength. 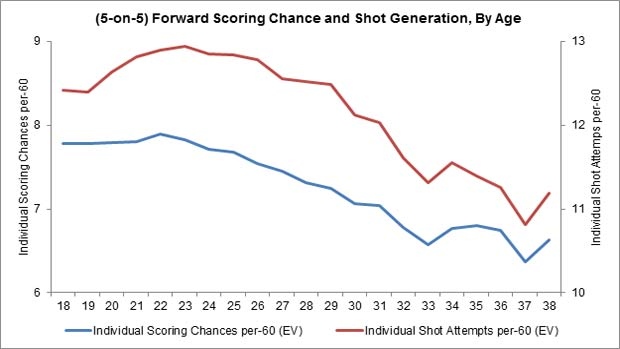 That is a pretty substantial drop-off in performance for forwards, and it materializes in nearly the same area where the original aging curve studies observed scoring drying up.

At the very least, we can reasonably conclude that a big reason why forward scoring drops off as a player ages through the league is because they simply are less threatening in the offensive zone. We see this start to manifest as a player approaches the age of 30. By the time he's blown past the 30-year hill, his numbers are far more likely than not to take a considerable slide.

One other thought: knowing how tough it is for a player to buck ugly aging curve developments, we should probably be even more appreciative of talents like Jaromir Jagr and Jarome Iginla.

It also should underline how absurdly impressive it is for players like Jagr to continue producing at their age. Most players at their mark are long out of the league, and many of the ones who have somehow stuck around are really just clinging onto their roles. Jagr turns 44 in February, yet by just watching him play, you'd think he was 15 to 20 years younger.

Utilizing different statistical measurements to pin down prime performance years was a valuable exercise, but it only served to reinforce what Desjardins and Tulsky found years ago. Generally, a forward is most dominant in his early to mid-20s. By the time said player has hit unrestricted free agency it's likely his best days are already behind him.