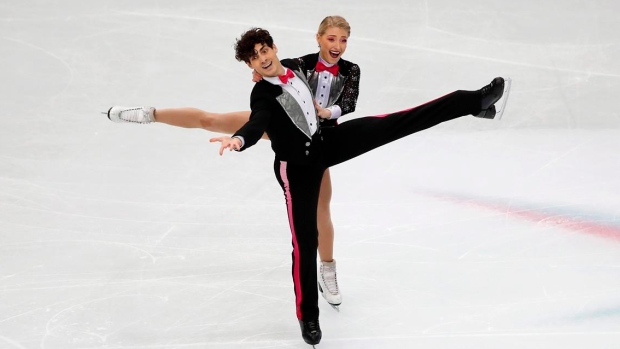 Gilles and Poirier, who earned world championship bronze this year, posted a top score of 208.97 points.

Poirier of Unionville, Ont., and Toronto's Gilles, an American-born skater who received her Canadian citizenship in 2013, placed eighth in the 2018 Winter Olympics in Pyeongchang, South Korea.

Spain's Olivia Smart and Adrian Diaz were second Saturday with 191.31 points ahead of Americans Caroline Green and Michael Parsons in third at 188.43.

‘’We’re very pleased with the way both programs went,’’ Poirier said. "’We didn’t try to force things or have that perfect skate.

"We just want to get everything sharper and we’re really excited to deliver such a strong showing and show that we keep improving.’’

Marjorie Lajoie of Boucherville, Que., and Zachary Lagha of St-Hubert, Que., placed fourth with 181.74 points. They won gold in the 2019 world junior championship.

‘’We’re really happy with the free dance and we didn’t hold back,’’ said Lagha. ‘’During the off-season we really worked on our skating skills and made some needed changes to our programs.’’

Orzel landed a pair of quadruple jumps in Friday's short program, but the 21-year-old didn't execute them cleanly in Saturday's free skate and also fell on a triple Axel.

‘’There’s some good takeaways from this competition despite a really bad long,’’ Orzel said. ‘’There’s no way of sugarcoating it. It was not what I had been showing in practice, but it helps me re-evaluate how I should prepare when I compete.’’

This report by The Canadian Press was first published Sept. 18, 2021.