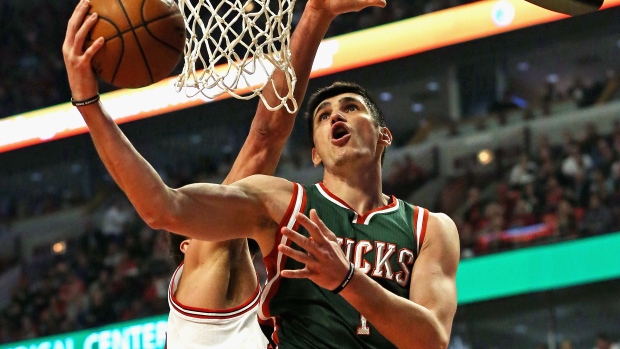 Detroit, MI (SportsNetwork.com) - With Greg Monroe possibly leaving via free agency this summer, the Detroit Pistons brought in a potential replacement by acquiring forward Ersan Ilyasova in a trade with the Milwaukee Bucks.

The Bucks will receive veteran forward Caron Butler and forward Shawne Williams in exchange for Ilyasova, a career 37 percent 3-point shooter who's averaged 12.3 points and 6.8 rebounds with Milwaukee over the past four seasons.

"Ersan Ilyasova is a player we have coveted since we got to Detroit," said Pistons head coach and president of basketball operations Stan Van Gundy. "Not only is he a proficient three-point shooter that can stretch the floor, he is a high-energy, hard-playing guy who fits extremely well with how we want to play. We are excited about what he can add to our team."

Ilaysova's addition could signal the end of Monroe's time in Detroit. The talented power forward will be an unrestricted free agent when the new league year begins on July 1.

Butler, a two-time All-Star and Wisconsin native who previously played 34 games for the Bucks in 2013-14, averaged 5.9 points in 78 games with Detroit during his 14th NBA season in 2014-15. The Milwaukee Journal Sentinel reported that the 35-year-old and Williams are expected to be waived by the Bucks, as both have non-guaranteed contracts that will allow the team to clear cap space.

"Caron, in particular, is difficult to say goodbye to," Van Gundy said. "Not only did he play well for us, his leadership went above and beyond. I'm not sure I've ever seen a single player have a more a positive impact on a team than Caron did on ours. He is a special person and we will always respect and appreciate what he did here."

Williams, 29, averaged 2.6 points and 8.6 minutes in 19 games with Detroit after being claimed off waivers from New Orleans in February.