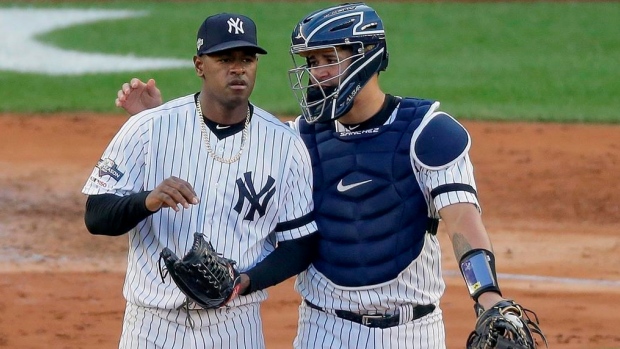 NEW YORK — Astros manager AJ Hinch has heard the chatter — that Rays starter Tyler Glasnow was offering a sneak peek on his off-speed deliveries, that Houston had a poker-worthy tell on Yankees hard throwers James Paxton and Luis Severino.

"I think it's kind of funny," Hinch said.

A year after suspicions on sign stealing made headlines when a man associated with the Astros was caught pointing a cellphone into opposing dugouts, Houston is giving pitchers pause again, perhaps with nothing more than the naked eye.

There's no rule against noticing a tipped pitch, and Hinch stated plainly during this AL Championship Series who is at fault if Houston knows what's coming.

"If they don't want to tip their pitches," Hinch said, "then they should take consideration into doing the same thing over and over again."

Batter's box espionage can take two forms — pitch tipping or sign stealing. The first is totally legal, just a matter of good scouting. Hitters might get an idea from the angle of the pitcher's glove or the wiggle of his wrist.

"If you, as a pitcher, show something different to the hitters, as professional hitters, they're going to take advantage of that," said Nationals right-hander Aníbal Sánchez, who nearly threw a no-hitter in the NL Championship Series opener at St. Louis. "It's no doubt."

On sign stealing, legality can get blurrier. A runner on second base has a clear view of the catcher's signals, and there's no rule against taking a peek and discretely relaying that info to the batter — although the opposing battery might still take issue. That's a practice as old as Cracker Jacks.

Smart devices and other fresh tech have opened another frontier for potential pilferers. Even before alarms were sounded in Cleveland and Boston last fall about the Astros' man with a phone, paranoia about cameras, Apple Watches and other devices has made intricate signalling a full-time practice.

Sign sequences have become dizzying, and Reds catcher Tucker Barnhart joked to The Associated Press this spring that he needed an algebra refresher just to call for a curveball.

"Adding, dividing, multiplying," he said. "All kinds of stupid stuff."

Although teams surely remain suspicious about the Astros and sign stealing, Houston's ability to recognize discrepancies in a pitcher's delivery has caused concern this month.

After getting tagged by Houston in the decisive fifth game of the AL Division Series last week, Glasnow noticed on video he was broadcasting his breaking stuff.

"It was pretty obvious as far as the tips go," he said.

More suspicions were raised in Game 2 of the AL Championship Series, when the Astros jumped on Paxton. Television cameras caught Alex Bregman saying "glove" to Houston's dugout after drawing a walk, a moment many interpreted as Bregman sharing a tell on Paxton's delivery.

Bregman has denied using such info this post-season and expressed annoyance Tuesday at social media sleuths searching for hints of it. But Yankees fans have good reason to be suspicious. Paxton was informed by former New York player Carlos Beltran after a start in April that Houston almost certainly knew what was coming.

Another former Yankees star is sure Severino was tipping in Game 3, when he threw 36 pitches in a rocky first inning of a 4-1 defeat.

It may be that Houston is noticing a wayward glove waggle in the moment, but cameras can also help — and legally, too.

"Right now, it's a lot of technology in the clubhouse," said Sánchez, a 35-year-old breakout star for Washington this post-season.

Longtime catcher Erik Kratz divulged a trade secret this spring. He told the AP that one of his former teams placed cameras behind home plate to detect when opponents were tipping. After games, the team would use video editing software to overlay each delivery from the pitcher.

If he was doing something differently on his breaking pitches — maybe moving an elbow in a funny fashion — the whole team would know to watch for it.

Kratz played for nine big league franchises, a list that includes the Astros and Yankees.

There's nothing illegal about that practice as Kratz described it, but every club has to decide how far it's willing to go.

"There's a lot of gray in there," Cardinals manager Mike Shildt said before NLCS Game 4 on Tuesday. "So my hope is that we're doing things within the game that is — again, everybody's got their own version of ethics, right? But there's a line there, and people can decide what line they want to stay on."

No matter what, it pays to be vigilant.

The Yankees are cautious even about what TV cameras might see in the dugout — after homering off Astros ace Justin Verlander in Game 2, slugger Aaron Judge walked up and down the bench whispering to teammates, using his batting helmet as a face shield. Whatever he knew, he didn't want Houston — or the public — finding out.

Hinch wouldn't find Judge to be out of line if it did. He believes hunting for pitch tells is basic recon work in today's game. Does a guy turn his glove grabbing at a change? Tend to throw fastballs in 2-0 counts?

All of it, fair game.

"It shouldn't overshadow the quality of play or the players or what's going on on the field," Hinch said. "The paranoia is real, though. And it's real across 30 teams."